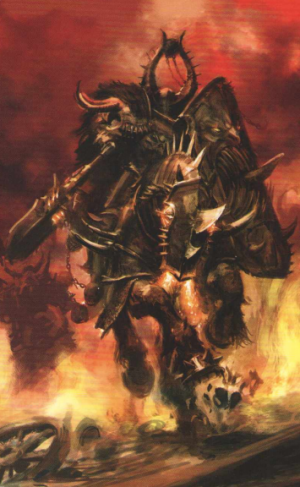 Chaos Knights are particularly mighty Chaos Warriors clad in the thickest plate armor, and whose dreaded reputation is known throughout as one of the world's most fearsome horsemen.

Chaos Knights are feared throughout the Old World and beyond as merciless butchers capable of turning the course of battle with a single thunderous charge. They ride unto battle atop immensely powerful Chaos Steeds, with both rider and mount clad in thick Chaos Armor, each section of armour having been crafted by a Chaos Dwarf master daemonsmith. A Chaos Knight’s greaves are jagged blades, well suited for slicing through the flesh of the enemy. Even the frightful reputation of the Chaos Knights is a weapon in its own right, crippling those who would stand against them before a single blow is struck. Amongst the cavalry of the Old World, only the vampiric Blood Knights or fabled Grail Knights of Bretonnia could claim superiority to these hulking brutes.

Many Chaos Knights ride to war with great lances, cavalry swords, or evil-looking polearms designed to impale and tear through enemy armor and flesh in equal measure. Others wield a deadly assortment of weapons, from cleavers and war-picks to heavy maces. Some Chaos Knights even brandish magical blades, each bearing a small measure of power. Regardless of the form or the hexes inscribed upon these magical weapons, they are all enchanted in order to kill, and most flicker with dark fire.

Chaos Knights are a highly egotistical group of warriors. Most if not all consider themselves superior even to other Champions of Chaos. They bow to none save perhaps a Chaos Lord or an exalted Daemon Prince, and even then they will not dip their banner, for their collective pride is the equal of their martial prowess. Each Chaos Knight is a paragon amongst his warrior brethren, for he has trod the path of damnation for many years and now holds the favor of the Dark Gods far more then the common ranks of Chaos Warriors. Few are left unmarked by the stigma of mutation after becoming a Chaos Knight. A Knight’s horned helmet may conceal a twisted and permanent rictus smile of sharp metallic fangs, or a striking and cold beauty that steals the breath away. In battle, a full squadron of Chaos Knights, galloping at full-speed, will hit a battle line like the mailed fist of the gods. Few mortal soldiers can truly survive a charge from a Chaos Knight and not be left scarred by the encounter.

The greatest band of Chaos Knights were the Swords of Chaos, legendary veterans who served as the Everchosen's bodyguard.