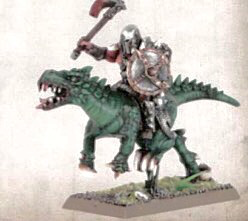 A Champion of the Skeggi.

The Skeggi are a great tribe of Norscan Marauders who dwell within the far off lands of Lustria.

Few Norscans wait idly by for the Chaos Gods to call them to war and instead set forth upon longships to plunder all the lands of the Warhammer World. Among the greatest of Norscan seafarers was the legendary Losteriksson, who, in the year 888 IC made landfall upon the coast of the New World, opening up the unexplored continent of Lustria to the predation of Man and forever altering the course planned by the great Old Ones.

Upon anchoring his three ships off the coast, Losteriksson and his men were plagued by sickness caused by insect bites. Leaving the stricken warriors behind to guard the ships, Losteriksson decided to head inland with the rest of his men to search for treasure. He had no idea what this unknown land contained, but assumed that there would be temples and cities to plunder just like there were in Ulthuan and Naggaroth. After a long trek through the jungle, and with only half his men still alive, he emerged into the overgrown ruins of a deserted temple-city. This was what Losteriksson had been hoping for, and his men began ransacking the place.

Some meagre items of gold were found in various vaults and crypts after a full days search, although several men dissappeared in the process. Losteriksson decided to return to his boats, intending to return again later with a bigger expidition. Returning back to the beaches the handful of survivors were surprised to find their longships deserted. The men had gone; not even their bones were left, their fate unknown. There were now so few Norse left that the share of the gold made all the survivors quite rich. Losteriksson could now return to Norsca with honour and the dowry for his beloved wife Inga.

When they returned word began to spread throughout Norsca of a new land overflowing with treasure. warriors flocked to Losteriksson's new and magnificent hall, built with his share of the gold, and clamoured for him to lead them into Lustria. He ordered many ships to be built and soon led a massive fleet of Norscans into the New World. After a long voyage they found their previous landfall and within a few days, the Norse had built a solid stockade around their longboats.

The settlement was founded in 888 IC[2a] and the new land was rich with timber and the human axes were sharp, so it was not long before a true Norscan settlement had taken shape, complete with a massive timber hall. The jungle was also cleared back by hundreds of yards, which did much to alleviate the sickness brought by the coutless insects. The Norse fed on fruit instead of the stodgy porridge of their homeland, and the meat of the great reptile beasts that were hunted in the jungle roasted wel on their spits. Lack of ale was a serious problem, until the first crop of corn was harvested. However the hives of the huge tropical bees provided honey to make a mead which surpassed anything in Norsca.

The new Norse settlement was named Skeggi, in honour of Losterikkson's daughter, the first child to be born in the new land. Eventually the settlement became a mighty port, the Norscan's gateway into the New World and the Skeggi became wealthy indeed through the tithes they enforced. It is a mostly lawless place where no behaviour is considered too extreme. [2a]

From their coastal stronghold the Norse of Skeggi launch raids that reach into every corner of the continent and beyond. To the north lies Naggaroth and numerous Chieftains have proved insane enough to launch raids against the Dark Elves. For the Norse who have grown up in Skeggi, the swealtering climate is of no detriment to them. Instead they have become adapt at negotiating the jungle pathways and hunting its great beasts. A few have even braved the dank caves, within which the Cold Ones lay their eggs, stealing away their viscious young to breed as war-mounts.

Many Norse wives had lost husbands since arriving in Skeggi and when the city was attacked they took up arms alongsidde the small number or remaining menfolk, defeating the attackers. However they were told (after the battle) that axe wielding in battle is man's work and not for women![3a]

When they angrily refused, they were given a longship and banished, heading far from Skeggi taking the name of Valkyries for themselves. [3a]

The Chieftains and Champions of the Skeggi are no less warlike than their cousins in Norsca. They may forgo the wearing of heavy armour due to the sweltering heat of Lustria, but they are very well equipped, and blessed with the gifts of the Chaos Gods. Some ride into battle upon mighty Cold Ones, leading the warhird of the Skeggi to battle in the search for pillage and blood.