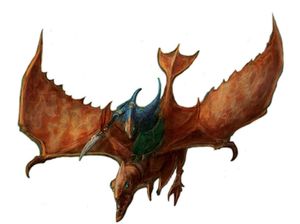 Ripperdactyls are a unique and terrifyingly dangerous species of flying reptiles whose sheer aggression puts it in a class above even the fearsome Terradons that haunt the skies above Lustria and the Southlands, and are used as mounts by the smaller Lizardmen. [2]

To such a vicious creature, Skinks are little more than a meal to be snatched up, snipped in two by a razor-sharp beak and then gulped down. Even if a Ripperdactyl is not hungry, it will still kill - for the act of slaughter provides it far more satisfaction than mere food. If Skinks are prone to twitching at shadows passing overhead, the Ripperdactyl is a common reason why.

Able to knife through the air on rippling, membranous wings of taut muscle fibre, the Ripperdactyls are enormous flying lizards that soar in small packs above Lustria, riding thermals until their incredibly sharp eyesight spots movement. For the Ripperdactyl, where there is movement, there is prey, for anything that moves is a viable target. Using wedge-tipped tails to aid manoeuvres, Ripperdactyls fold their wings upon themselves and plummet. Led by the most ferocious of their kind, the Ripperdactyls hurtle downwards like missiles, smashing into their foe with incredible velocity.

Those lucky enough to have witnessed a Ripperdactyl attack and survived have likened their assaults to the feeding frenzies of the deadly ripperfish — a hurricane of slashing claws and stabbing beaks. Flocks have been known to swoop down upon beasts as large as Colossadons, leaving scant moments later when the carcass is picked clean of the tastiest morsels. Being such voracious hunters, they do not strip their kills to the bone — instead eating only the choicest bits before seeking new prey.

Although Ripperdactyls are merciless killers, eager to devour anything that moves, there is one foe that they target above all others. The Lustrian blot toad, the largest member of the barking toad family, is a noxious beast, known to invade the cliff-side lairs of Ripperdactyls. Even a single such toad produces an odour almost unendurable to cold-blooded creatures. When gathered in numbers, they release enough foul swamp gas to drive off a hungry Carnosaur. For reasons unknown, the favourite food of blot toads is Ripperdactyl eggs. Naturally, Ripperdactyls seek out such beasts, destroying any they find with extreme prejudice.

It is thought that a large flock of them was swept far from the Southlands by a huricane and attacked the people of the Bretonnian city of Brionne, killing hundreds of peasents and even knights that tried to fight them. Finally they were driven away by Pegasus Knights. [2]