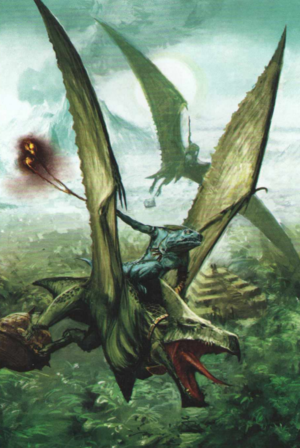 A Terradon with its Skink rider.

Terradons are giant, flying reptilian creatures that soar the skies of Lustria and the Southlands as well as the Dragon Isles. [1a]

Notably more intelligent than the Cold Ones and more easily trained [2a] they have great eyesight which allows them to spot their prey, hidden deep in the jungles, from hundreds of miles above the ground. They prey on anything man-sized or smaller, from birds soaring over the trees to ground-dwelling animals and intruders on the jungle floor. [1a]

The Wyvern of the Dragon Isles prey on adult terradons swooping down upon them. [1a]

Their huge, leathery wings can propel them at great velocity, and they are surprisingly agile, able to fly at full speed through thick jungle while avoiding branches, vines and trees. They are also expert gliders and can remain airborne for days on end, utilizing the steamy, hot thermals that rise from the jungle. [1a]

Some Skinks had mastered riding these airborne monsters, using them to scout ahead, spying on the enemy from far above and then striking suddenly with great speed. The Skink riders throw Javelins at the enemy, while the Terradons use their razor-sharp claws and snapping jaws to tear their prey apart. Descending with mighty beats of their powerful wings, they latch onto their foes with their strong claws, snatching them into the air before letting them plummet to their doom.

Sometimes, a Skink Brave may lead a group of Terradon Riders and launch a very powerful attack from above.

Terradons are easy to bind by even novice wizards but remain dangerous as even in nature will rapidly turn on wounded or weak pack mates. The Dark Elf Sorceress Druiah Cruelheart Druiah bound a huge flock of Terradons to her service, coming to treat them as pets, even feeding them the flesh of her rivals but when she cut herself during one such feeding, she was herself torn apart in a flurry of teeth and talons. [2]