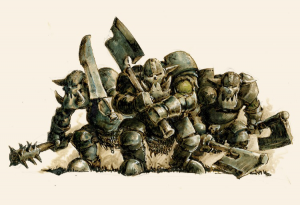 Da Immortulz were the mightiest group of Black Orcs in existence, serving as Grimgor Ironhides bodyguard.

When Grimgor Ironhide first appeared from the East, he was surrounded by massive, battle-scarred Black Orcs, these he named Da Immortulz, and they had fought alongside their Warboss in countless battles. Each of these Orcs was a mighty warrior in their own right, almost as fearsome as Grimgor himself.

The Immortulz had fought at Grimgor's side since the Warboss first marched out of the east. Since then they had brought ruin to Dwarf holds, Skaven lairs and innumerable human settlements across the Worlds Edge Mountains. They had toppled the empire of the Chaos Dwarfs and destroyed the lands of Cathay and Nippon. Like their leader, they cared little for wealth and territory. Instead they sought only the joy of battle. Middenheim was therefore paradise, filled as it was with the very best of warriors that the northlands had to offer. Unlike Grimgor, most of the Immortulz saw little reason to ally with the weakling elves and men, but were nonetheless content to let their boss do the thinking.

Da Immortulz managed to slaughter their way through Skaven, Daemons and Chaos Warriors, when Grimgor fell to the Daemon bound within Archaon's sword, the Black Orcs let out a howl of rage. Slaughtering their way through the equally legendary Swords of Chaos the Immortulz, killed in a berserk fury, but eventually became surrounded by daemons and northmen. Even the rage of the Orcs had its limit and eventually the last of the Immortulz fell, leaving behind a sea of slaughtered Northmen, broken bones and shattered weapons.