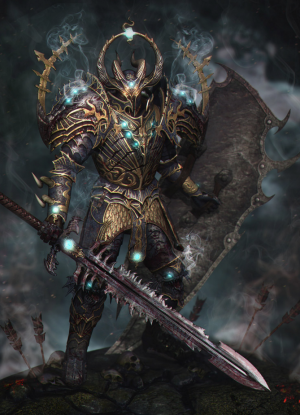 Chaos Champions, also known as "Exalted Heroes" are paragons of deadly ability and lethal intent, risen from the rank of Aspiring Champion. Some ascend to command entire nations, some pursue the esoteric paths of the arcane, but the majority dedicate themselves to little more than the brutal butchery of all who stand in their path. The history of many Chaos Champions, recorded in scattered chronicles by the free people of the Old World , is a catalogue of woes and evil deeds. Their infamy shines bright as they capture the notice of the Dark Gods of Chaos with ever greater feats of slaughter.[1]

A Chaos Champion striding to war in full battle armor is a sight that strikes fear into the hearts of all Man. A single Champion of Chaos is the equal of a score of lesser men upon the battlefield. As with all those that dedicates themselves to Chaos, they have been blessed by many gifts that grant him the means to bring about destruction in his wake.[2]

Chaos Champions frequently seek out others of their kind to engage in ritual combat. When two of these Champions of Chaos clash, they duel to the death in the manner of gladiators, using the full force of every weapon at their disposal. When a victor emerges, bloodied but triumphant, he will cut a grisly trophy from his foe, claiming both his vanquished enemy’s weapons and followers as his own. If the triumphant champion has truly excelled, he may even succeed in attracting the attention of the Dark Gods and, in doing so, receive a more permanent reward for his deeds in the form of a mutation or daemonic gift. With each victory, the champion grows ever closer to becoming a Chaos Lord, with whole armies to command and daemonhood within his reach.[1]

Some Chaos Champions choose to pledge themselves to single Chaos God. Forgoing blessings of all four, they instead receive a single mighty gift in exchange.