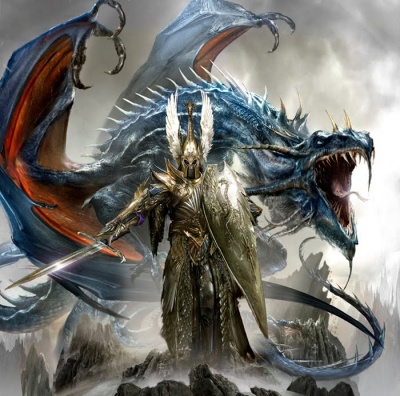 Aenarion the Defender was the first Phoenix King of the Elves and their greatest hero during the Coming of Chaos. Both High Elves and Dark Elves claim to be the true inheritors of his legacy.

In his younger life, Aenarion is thought to have been an adventurer, a restless soul who wandered through Avelorn seeking his fate. [1a] By the time the Daemons began slaughtering their way across Ulthuan, he had travelled the world. [3a]

The first Phoenix King, driving back the daemons

Eventually, the polar warp gates built by the Old Ones collapsed and raw Chaos flooded into the world. Armies of malevolent daemons began rampaging across Ulthuan and though the Elves fought valiantly, none of the kingdoms of Ulthuan could withstand the tide of Chaos ALONE. [3a]

Like many elves, Aenarion fought against the tide of Daemons as he could, but quickly realised that their weapons and magic was inadequate to the task. He travelled to the shrine of Asuryan and begged the Phoenix God to save the Elves. He offered up sacrifices and offerings but finally offered himself up as a sacrifice, and walked through the eternal flame at the Shrine of Asuryan. The raging inferno burnt him terribly until those who were watching thought him dead but he staggered on and began to heal until he miraculously emerged unburnt. [1a][3a]

A horde of Choas emerged to attack the shrine and Aenarion moved to confront them, a thrown spear implaing and killing their general, Morkar as well as a standard bearer and a minotaur. Filled with the power of the god he destroyed the entire horde with Morkar's own blade, aided by the inspired elves near the shrine. Aenarion then led the surviving elves to Caeldor who along amongst the kingdoms had been able to stand against the deamons. Caledor Dragontamer recognised the divine spirit and two flet by dragon to Vauls Anvil where armour and weapons were forged for Aenarion. [1a][3a]

Together they built a army and led them against the dameons, Aenarion mounted on the ancient dragon Indraugnir driving them from the heart of the continent to the shores of their lands. Many great champions of the Chaos powers were destroyed including Aazella Silkenthighs of the Skull Dancers of Slaanesh, Hugin the Plaguelord and Vorghan the Slayer. [1a]

In -4477 IC Aenarion courted and married the Everqueen of Avelorn, Astarielle, and they had two children, Yvraine and Morelion and for a time they were happy and there was peace in the land but still the energes of Chaos flowed from the broken warp gates. [1a][3a]

However, the daemons eventually returned all across the world and the elves fought them for decades, aiding the Dwarfs and other races but with the enemy seemingly endless. Finally after a century Caeldor forged a plan to create a great ritual that would drain the magice from the world although Aenarion opposed such a desperate option. However as he fought on, in -4468 IC [1b] a Greater Daemon of Slaanesh called N'Kari murdered Astarielle, although the bodies of his children could not be found.[1a]

Distraught and overcome with rage, Aenarion travelled to the Blighted Isle in northern Ulthuan, and thence to the Shrine of Khaine in the Isle's center where he drew the Sword of Khaine. This was a weapon of terrible power, meant to be wielded by the Gods, and drawing it cursed his family line forever, it is even said that the ghost of his wife came to him and begged him to not to take the blade. [1a][3a]

With the power of Khaine, Aenarion fought like a demigod, driving back the daemons once more, the elves that followed him empowered by the blade and becomming fearless but also cruel and merciless. During the campaign (-4460)[1b] he forged a new kingdom in the north - Nagarythe and rescued an elven woman called Morathi captured by Slaaneshi forces. Aenarion was captivated by her beauty and soon they married and had a son: Malekith. Aenarion held court in his Kingdom of but in spite of his new marriage and son, Aenarion's mood continued to darken as the Daamons continued to assault the world. [1a][3a]

He could no longer taste food or drink and the world was less and less vivid to him and even the potions tht Morathi made to aid him sleep failed. All the time the sword urged him to kill everyone. [4a]

The Daemons now assaulted in greater numbers than ever and Aenarion left to battle them again. Despite having the power of both Asuryan and Khaine, it was a losing battle. The power of Chaos could not be undone through battling the hordes of daemons, as the immortal creatures would simply return later. Caledor had devised a plan to create a vortex to siphon away the raw magical energy flowing into the world at the poles. [1a] [3a] Morathi urged him not to go, telling him if he left her die, he would die - when he refused to stay she told him she loved him but he was a fool. After a last brutal kiss, he left her crying. [4b]

The four squabbling Chaos Gods had realised the danger this posed to their plans, and forged a rare alliance, sending united armies of daemons to converge on the Isle of the Dead, where the ritual was to take place. Aenarion now led his entire host to Caledors aid, the sky darkening with the vast number of dragons.[1a] [3a]

Aenarion held back the tide while Caledor and his mages worked their great ritual. It was in the midst of this titanic battle that four Greater Daemons of Chaos converged on Aenarion and Indraugnir. A mighty Bloodthirster of Khorne, Hargrim Dreadaxe, the Tzeentchian Lord of Change, Kairos Fateweaver, a Great Unclean One of Nurgle, Throttle Gurglespew and, on behalf of Slaanesh, N'Kari., all of whom sought to destroy the champion. The Daemons were mighty, but Aenarion fought like a god and struck down all the abominations, taking a mortal wound in the process. However, Aenarion's desperate final stand had bought Caledor enough time, and the ritual succeeded. Without magical energy to sustain them, the Daemon armies vanished, cast back into the warp from whence they came. Clinging to life, Aenarion and Indraugnir flew back to the Altar of Khaine on the Blighted Isle, and plunged the Widowmaker into it, before collapsing and dying.[1a][3a][4c]

Without the noble sacrifice of Aenarion, Caledor would have been interrupted and the Vortex would have failed. Thus, the world would have been consumed by Chaos long before the civilizations of men ever arose. Both the High Elves and the Dark Elves claim kinship with Aenarion, and both revere him highly. Malekith, Aenarion's son by Morathi, still lives and leads the Dark Elves as the dreaded Witch King. Among the High Elves are the twin brothers Tyrion and Teclis, descended from either Morelion or Yvraine. Tyrion is the greatest warrior of the High Elves and wears the Dragon Armour of Aenarion, which was originally owned by his forebear. Teclis is the most powerful Elf mage alive, a rare match for even the greatest Slann of the Lizardmen.

Song of the Creator

It is recited five times at Dawn each decade by Elves across Ulthuan, commencing the Festival of Light. [2a]