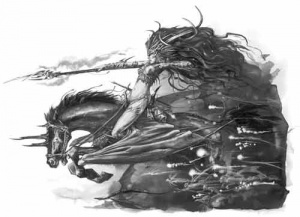 Morathi the Hag Sorceress is the mother of and rumoured lover of the Witch King Malekith. [1a]

She is also the first Hag queen of the Witch Elves. Morathi can be seen as the indirect cause of The Sundering as it was she who introduced the pleasure cults to Ulthuan.[2a] [3c] In the land of the Dark Elves Morathi remains second in power only to her own son, and has spent 5000 years teaching him about statecraft and magic, working continuously to maintain his grip on the throne of Naggaroth.[2a]

Morathi long ago decided that she would become a goddess, whatever it took to achieve her desire. [7a]

When she was eleven years old she began to receive prophetic visions, apocalyptic glimpses of the deamonic invasion to come but the other Elves, lulled by their idyllic, peaceful existence did not listen to her warnings. As time passed she tried again and again, seducing princes, prophesying and using her beauty to gain the attention of the great and the good including the Everqueen. No-one listened, and then the Daemons came anyway. [7a]

She became the second wife of Aenarion after he rescued her from a Slaaneshi warband in the days of the first Chaos invasion before The Sundering. [2a] [3c]

After the The Second Great Chaos Incursion, the princes of Ulthuan needed to elect a new Phoenix King. Though Malekith was the obvious choice, the princes instead passed it over to Bel Shanaar since they needed a ruler who was less warlike (Despite Morathi protesting against it). Bel Shanaar then married Yvraine (Aenarion's daughter from his first wife), causing Morathi to lose her title as Queen.

As Malekith set sail for the Old World, Morathi founded and secretly led the Cult of Pleasure, a chaos cult greatly devoted to the worship of Slaanesh. The cult's influence spread to nearly all parts of Ulthuan. Its influence affected many thousands of elves and even to some of the noble princes of Ulthuan. While the cult was growing, Malekith gained popularity amongst the Old World colonies by leading successful victories against orcs and the forces of chaos and also made an alliance with the dwarfs, with him befriending the dwarfs then High King Snorri Whitebeard. Morathi visited her son in the city of Athel Toralien after she heard that he was setting an expedition to the north. She gifted him with a massive Dragonship called "Indraugnir" naming it after Aenarion's dragon mount. She eventually returned to Ulthuan after her son's departure where she continued to secretly lead the cult.

Malekith later returned to Ulthuan after his expedition, and took charge of purging the cults existence from Ulthuan forever. Morathi's position as leader of the pleasure cults was eventually exposed when Malekith captured one of the cults bases at Ealith (Though she escaped by the use of her sorcery). She fled to the city of Anlec where a large number of cultists resided. Malekith led an army,consisting of both his own army and the supporting armies led by the princes of Ellyrion, Yvresse, Chrace and Saphery. Malekith was successful in breaching the cities defences and confronted his mother in the cities palace. Though Morathi had the upper hand with her great sorcerous powers, she was defeated. Morathi was spared from certain death by convincing her son that she would give him her full support of the cults and help him gain the Phoenix throne.

She was brought before the court of the Phoenix king in the city of Tor Anroc. Though she would have been executed for her crimes, Malekith convinced Bel Shanaar to imprison her instead, despite Imrik of Caledor's insistence to have her severely punished. After years of planning, Malekith decided to set his plan in to action. With Morathi's help, he poisoned Bel Shanaar and killed anyone who resisted. Malekith confidently marched into the sacred flame of the god Asuryan, a trial that marks each Phoenix King as the chosen of the Elven creator god. Yet without the appropriate warding spells being cast, the flames horribly scarred Malekith. Malekith's followers carried him to his fortress in Nagarythe where Morathi nursed him back to health. She instructed a renegade priest of Vaul to forge him the Armour of Midnight and his blade the Destroyer. [2a]

Following the defeats of Malekith's armies by Tethlis and concerned about her son withdrawing from the world, Morathi instigated a rebellion in the city of Har Kaldra which, as she had hoped, drew his wrath. A year later she discovered that Allisara was returning to her husband's side, unwilling to allow a rival, she secretly deceived Prince Valedor of Ulthuan and ensured he led an army to confront Allisara and her escorts, slaying them all. Morathi broke the news of his wife’s death to her son.[5a]

Her son informed her that Hellebron was suspicious that she was reviving the Slaaneshi pleasure cults and calling a council at the Feast of Khaine. Morathi was unconcerned. [2b]

In 2301 IC [3b] the Dark Convent of Ghrond noted the rising power of Chaos in the wastes and so Malekith and Morathi travelled to the north to view the growing hordes beyond the borders. However, Morathi, ever resourceful, looked to turn this to her advantage leading a huge expedition out to meet the growing tribes. She plied them gems, gold, slave concubines - creating a great ice palace to greet the emissaries. Tens of thousands of warriors would pledge themselves to fight for her and her son. [3a]

In the fires of the Burning Mountain she forged the lance Heartrender in 2304 IC. [3b]

As her son assaulted Ulthuan, draining Naggaroth of the majority of the Dark Elf warriors, Morathi was concerned that the hordes of Chaos could sweep down from the north. She had already revived the Cults of Pleasure involving the Dark Convent with them to provide a powerful alliance and now she travelled into the north to further boost the cults and her own power. [4a]

Accompanied by a number of Sorceresses, she flew into the lands of the Hung, arriving at a great gathering of warbands where she was recognised as having the favour of Shaarnor. She summoned a great horde of sixty troupes of six Daemonettes which she unleashed upon the enemies of the Hung, the Kurgan, impressing the warlords to name her as an ally and the Consort-Queen of Shaarnor. She then led a great army of the Hung south through Naggaroth to invade Lustria.[4a]

She is the first and most powerful Hag Queen of the Cult of Khaine who is said to have been gifted with the first Cauldron of Blood which still restores her youth and beauty and which she has forbiden to Hellebron. [2a]

She often rides the Dark Pegasus Sulephet into battle. [1a][2a]