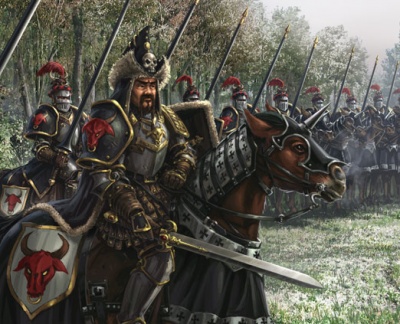 It is rumoured that he had several romantic affairs which produced several sons and daughters, but none of them have been publicly acknowledged[7a]. The count had a romantic relationship with Anastasia, a simple tavern wench working in the city of Altdorf[6], as well as with a Kislevite ambassadress.[1a]

However a recent Chaos incursion led to the disappearance of his wife and to the death of Oleg, his favourite son[7b].

Boris von Raukov is reportedly Valmir's eighth son, probably illegitimate. He left Ostland to pursue a military career. He is currently the captain of the 4th Nuln Halberdiers, a mercenary regiment based in the city of Nuln[8].

At the head of his armies he has fought against bandits, barbaric Orcs and Goblins, savage Beastmen, seaborne Norse raiding parties and marauding Chaos warbands. He is widely considered one of the most warlike leaders of The Empire.[3]

Due to unknown reasons the count joined the cult of Sigmar[6]. His conversion led to some unrest inside his province as the majority of the Ostlanders are devout followers of Ulric[6].

In 2515 IC, confronted by a brutal invasion of his province, he called for assistance from the rest of the Empire. Unfortunately the Emperor was in Bretonnia with much of the army, but a coalition was assembled with a relief froce from Nuln under Grand Marshal Ludwig Gutman and a second force under Elector Count Marius Leitdorf marching to their aid. A third force was dispatched by Countess Freya Feuerbach and a council of advisors in the absence of her husband under the leadership of Captain Otto von Brumderhack. [9a]