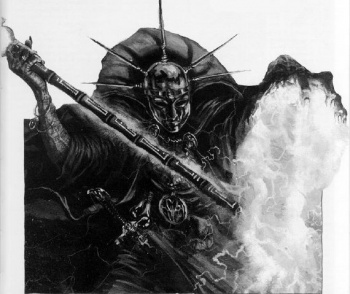 Bathasar Gelt, Supreme Patriarch of the Colleges of Magic.

Balthasar Gelt is the Supreme Patriarch of the Colleges of Magic.

He originally arrived in Altdorf from the seaport of Marienburg. He had paid his passage on a merchant ship using gold transmuted from lead. By the time the magic wore off Balthasar was long gone, but the captain placed a large bounty on his head - a bounty that few would dare to claim.[1b]

Balthasar had always been obsessed with transmuting crude metals into gold. However, he was also interested in combining science and magic, which increased his knowledge of the Lore of Metal to greater than any other wizard. In fact, due to his research into black-powder, Balthasar even became popular with the College of Engineers, despite their usual scepticism of magic.[1b]

After a freak explosion in his laboratory, Balthasar was never seen without his metallic robes and golden mask. It was rumored that he was disfigured. Others whispered that his flesh had actually been turned to gold in the explosion - not an accident at all.[1b]

The explosion furthered Balthasar's will to succeed, until he defeated Thyrus Gormann and became Supreme Patriarch, replacing the prominence of the Bright Order with that of the Gold Order.[1b]

After becoming Supreme Patriarch, Balthasar was seen on many battlefields with the Empire's armies.[1b]

One memorable occasion was when the Emperor Karl Franz requested his assistance to avert a civil war between the aggressive Elector Count of Nordland and the neighbouring province of Hochland. Balthasar visited Castle Salzenmund, and secretly turned the gold coins for the Count's soldiers and mercenaries into lead, before swiftly fleeing on his Pegasus.[1a]

At the beginning of the End Times, Balthasar created a Wall of Faith around Sylvania to keep Mannfred von Carstein and Arkhan the Black in.[2a] However, it didn't work.[2b] Gelt later made the Auric Bastion, a similar barrier in the north of the Empire, with better results.[2c]

Later, Gelt discovered a weak link in the bastion in eastern Ostermark, around Castle Rackspire. He traveled there, only to realize it had been taken over by Vlad von Carstein and The Nameless. Vlad attempted to make Gelt his ally, telling him that they must join forces in the face of Chaos. Gelt refused the alliance, but took von Carstein's gift- the Revelations Necris, a heretical and necromantic book.[2d]

Eventually he was found out by Aldebrand Ludenhof. Gelt was forced to kill Ludenhof before he spread the word. He managed to blame Ludenhof's death on Forest Goblins[2e]

After that incident, Gelt went north to Castle von Raukov where the Emperor was staying. When a changeling masquerading as Valten tried to kill Karl Franz, Gelt managed to stop him, but was forced to raise undead in the process. Gelt had to flee to Rackspire Castle, where he became Vlad's apprentice.[2f]

Gelt's successor as Supreme Patriarch was Gregor Martak, of the Amber Order.[2f]

In battle Balthasar rode Quicksilver[2f], a Pegasus from the Imperial Zoo, and carried the Staff of Volans and a sword. He wore the Cloak of Molten Metal and the Amulet of Sea Gold. Finally, he carried a vial of Al-kahest.[1b]