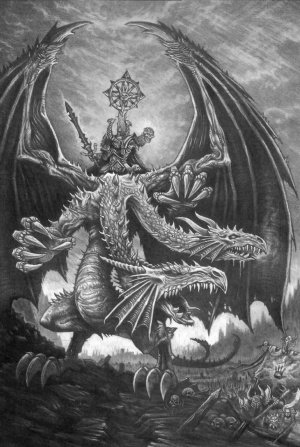 Egrimm van Horstmann was a mighty Sorcerer Lord and the greatest mortal follower of Tzeentch.

Egrimm van Horstmann is the most infamous, and perhaps most dangerous, of the Imperial Colleges’ few known traitors, and he is the White Order’s greatest shame. There was a time when Horstmann was counted amongst the brightest and most talented Magisters of the Order. He was the last occupant of the Patriarch’s Throne at the Order of Light, before Verspasian Kant.

In his day, Horstmann was acclaimed as the youngest, most gifted Magister to ever preside over one of the Empire’s Colleges of Magic. As he knelt down to swear his allegiance to the Supreme Patriarch, the Emperor, and the cause of the Order, no one guessed that his loyalties, and soul, had already been given over to a far more sinister master. [2a]

As an apprentice Chanter of the eighth circle of the Order, Horstmann served under the late and respected Master Chanter Alric, the Saviour of Apesto, who taught him many of the Order’s ancient secrets. But all the time he served with the White Order, Horstmann was praying to the Chaos Gods for the power and knowledge to surpass his peers, which explained his rapid progress through the ranks. By day, he studied the pure magics of Hysh, and by night he pored over the ancient manuscripts devoted to the tainted lores of sorcery that the Hierophants kept locked away within its libraries. The Daemons of Tzeentch no doubt whispered their timeless secrets into Horstmann’s sleeping mind, and his powers grew strong.

For three years, the wicked Patriarch worked his evil. Seeds of corruption were planted in the hearts of many of Apprentices and Magisters, and many of the most promising initiates to the Order were lost in the shadow Horstmann cast across it. Such was his skill at weaving wicked magics, Horstmann was able to subtly alter many of the Order’s rituals, redirecting their otherwise benevolent powers to his own ends. Most outrageously of all, Horstmann actually used the energies called down by the choirs of Apprentices to work away at the vaults beneath the Pyramid of Light — vaults that had remained sealed since the founder of the Colleges of Magic, Teclis of Ulthuan, had created them as a prison for some of the most terrible creatures and artefacts from the last Great Chaos Incursion. One by one, Horstmann defeated the vaults’ magical locks to reveal the forbidden things they contained. It’s impossible to calculate the damage done or the horrors unleashed upon the world by Horstmann before his evil was uncovered.

The discovery of Horstmann’s corruption is a long, morbid tale with a terrible ending. Before he and his twisted Apprentices fled before the combined fury of Volkmar the Grim, the Witch Hunter, and those initiates of the Order who were still loyal to its honest principles, Horstmann managed to free the infamous Chaos Dragon Baudros from its prison beneath the Pyramid of Light, and upon its winged and two-headed form Horstmann took to the sky and fled towards the Chaos Wastes.[2a]

Reliable information about Horstmann after this point is hard to come by. It is known that he set about creating a citadel fortress in the Wastes, at the edge of the Screaming Hills. To these gleaming silver towers he summoned many corrupted souls - many of them being the very College folk his machinations had so perverted.

Some legends claim the first to answer his call were sacrificed to create the dread Banner of the Withered Eye - slayer of men and symbol of Horstmann’s devotion to Tzeentch. Be this true or not, more power hungry pilgrims arrived at Egrimm’s towers, ready to sacrifice their souls to become apprentice to the traitor.

How anyone finds the Cabal to join it is a mystery. But once accepted, a sorcerer must swear binding magical oaths of loyalty to Horstmann, and his dark lord, Tzeentch. Once branded with Tzeentch’s rune, the initiate can never rebel against the will of his masters under pain of being reduced to the state of a mindless spawn of Chaos.

Horstmann’s Apprentices are everywhere, and nearly two thirds of all the Chaos cults in the Empire are either created indirectly by agents from within his network, are controlled by his Cabal in some round about way, or owe direct allegiance to him. Such plotting and scheming no doubt pleases Tzeentch, and he seems to have rewarded Horstmann greatly over the years, making him his most favoured mortal servant.

Egrimm was one of the greatest magic users in existence and a skilled warrior, riding atop the mighty Chaos Dragon, Baudros, he was a force of limitless destruction. Besides his powerful Chaos Armour and Chaos Runeblade, he wielded a powerful artefact, the Skull of Katam.