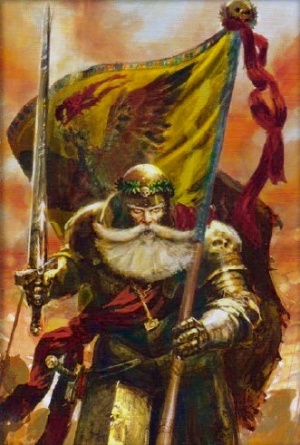 Ludwig Schwarzhelm, known as the Emperor's Champion or the Emperor's Sword of Justice is the personal bodyguard of Karl Franz and bearer of his personal battle standard.

Ludwig is a towering figure of a man, renowned throughout the Empire for his mighty physique, stern expression and deadly martial skills. The Emperor's champion is said to have never smiled in his life and his reputation as an uncompromising, incorruptible warrior is one Ludwig has consciously cultivated over the years.[4]

His role is to uphold the Emperor's Justice during trials of combat, which are the judicial right of all high-ranking nobles accused of breaking one of the Emperor's laws. Such is Ludwig's deadly reputation that many accused nobleman have confessed their guilt before a sword has even been drawn. Ludwig is also Karl Franz's principal bodyguard and his mere presence has so far proven enough to discourage any Imperial attempts on the Emperor's life.[4]

In addition to his formidable skills as a master swordsman, Ludwig also acts as a potent reminder of the Emperor's authority, travelling to various provincial capitals to ensure that Imperial Edicts are being obeyed. Karl Franz has an unyielding sense of fairness and honor, and he does not look kindly upon those lords who flaunts their wealth whilst their populace languishes in abject poverty.[4]

The arrival of Ludwig at the gates of an Elector Count's castle is greeted with some trepidation, even amongst those loyal to the Emperor, for Schwarzhelm is notoriously inflexible and critical of those he perceives as lacking in strong moral fiber and faith. On one occasion, Ludwig was forced to fight for his life after unmasking a Chaos cult hidden at the very heart of the von Rauken family of Ostland. However, as dawn broke the following morning, it was the Emperor's Champion who marched alone, but victorious from the castle - his armor rent and battered and his sword dripping with blood.[4][2]

When the Emperor travels the land, it is with the unsmiling Ludwig at his side, and Karl Franz's diplomatic words are often backed up by the silent yet ever-present threat of his Champion's keen blade. In battle, the Emperor's Champion rallies the Empire army to Karl Franz's banner, and takes on the role of his bodyguard, saving his lord's life on more than one occasion.[4]