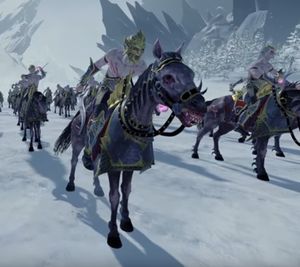 Doomfire Warlocks were a deadly cavalry made up of cursed Dark elves.[1a]

When Malekith first learned of the Prophecy of Demise, his initial wrath was unleashed upon the Doomfire Warlocks of Hag Graef. Fearing that they would rebel, the Witch King cursed them with hollowness, and since then their souls have teetered between the mortal world and the Realm of Chaos. Whilst other Elves fear Slaanesh will devour their souls, Doomfire Warlocks feel the Dark Prince's grasp grow with every passing day. As that grip tightens, dark runes blaze into life in their flesh, a fire that creeps slowly across their skin. If this process is not arrested before the Warlock's entire body is swathed in flame, his soul is snuffed out and consumed by the Dark Prince. This fate cannot be stopped as no mortal can long deny the hunger of Slaanesh but it can be stalled if the Warlock sacrifices others in his stead -- the purer or mightier the soul, the better.[1a]

Hence Doomfire Warlocks descend upon villages in the dead of night, seeking victims to slake Slaanesh's thirst and proect their own soul. Cloaked in shadow, they pass like phantoms through defences, stealing prey from their beds before vanishing into the night. When a Dark Elf army musters, the Warlocks gather, hoping to capture mighty warriors to fuel their rites. To aid this cause, they infuse their scimitars with numbing curses that strip a foe of his sense with a single scratch. Alive but mindless, the victims are led from the battlefield to the rituals that will keep Slaanesh at bay for a few days more.[1a]