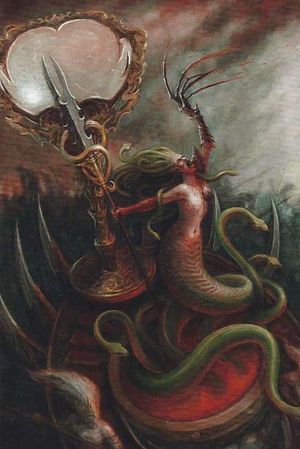 Medusa on a Bloodwrack Shrine

The Bloodwrack Shrines are sacred to the Goddess Atharti and they are used to bring a Bloodwrack Medusa into battle. [1a]

Thousands of years in the past a group of Sorceresses drew the wrath of the goddess Atharti who transformed them into serpentine forms, constantly wracked by pain, their minds shredded save for a painful awareness of what they had lost. Morathi, who had no need of enhancements to her own natural beauty drove them from her city, offering her thanks to the goddess. {Fn|1a}}

Finally Morathi took notice of them again and sent warriors to capture them, returning them to her with their faces masked and their claws bound. They are then chained to a shrine to the goddess who struck them down and guided by dark magic to the forefront of the Dark Elf armies. [1a]

If a victim meets the eyes of a Medusae, their very lifeblood rebels and explodes out from their body whilst a deadly hint of the Medusaes own despair flows into any that come to near, save for other Dark Elves who enjoy the potent scent of suffering. They are guarded and guided by Shrinekeepers of the Goddess, their own faces cloaked by mirror masks and to whom the very act of worship is their greatest pleasure. [1a]