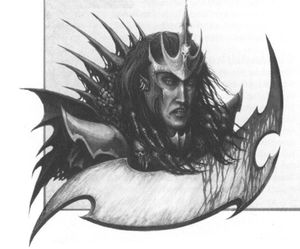 Duriath Helbane is a Black Ark Fleetmaster who commands the families Black Ark, the Temple of Spite. [1a]

Duriath has been a Corsair for more than 700 years and in that time has fought lizards on the Dragon Isle, raided villages in the Southlands and cities in Ind. [1a]

He has now gathered a raiding force of ten thousand elves and a fleet of more than two dozen warships with which he plans to invade the Isles of Elithis and build a new stronghold in the despoiled ruins of the High Elves. A fortress on these islands would give him and his already powerful family the ability to control trade routes through the Boiling Sea. [1a]