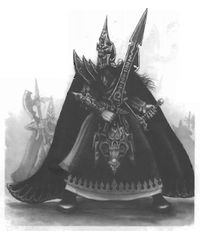 He is known as a efficient and ruthless leader who once sacrificed half of his army to draw the enemy into a trap achieving a great victory. Consequently he is both respected and feared by those under his command. [1a] He has defeated every enemy army he has faced. [2b]

Kouran is a member of the Black Council. [4b]

Kouran has fought for the Witch King for almost a thousand years, in his first decade he became Master of the Tower of Grief, killing the previous Master by choking him to death with his own hair - he would retain the skull as a trophy. In the following centuries he would fight the enemies of Malekith in Bretonnia, Ind and The Empire and on his return, threw the Captain of the Black Guard to his death off the east wall of Naggarond, impressing the Witch King and taking the dead elfs place. Four centuries have seen him slay 17 challengers to his position as captain. [3a]

In the Battle of the Bloody Dawn, he led the Guard against the Tor Anroc, the capital of Tiranoc, their way prepared by many Shades killing patrols and sentries allowing his force to enter without being noticed - at first. They then slaughtered and despoiled their way through the palace, the birthplace of Bel Shanaar leaving the corpses of their foes in the shape of a rune of Khaine. [3a]

Following the defeat of the Witch King and his army at the Battle of Finuval Plain, he led the survivors back to Naggaroth, defeating three armies that brought him to battle but leaving any behind that could not keep up the pace. Finally he returned to Naggarond to find that the throne of his lord had been usurped and Morathi imprisoned, unpreturbed he declared the Black Tower off limits and went to the throne room. A month later he locked himself in with the rival Dreadlords who were claming the throne, stating that only one would leave - a hour later and he was the only survivor to leave. He would then free Morathi and for the next six months they would carry out a bloody purge of the city. [4a]

He is totally loyal to the Witch King, an extremely rare trait in a Dark Elf and often considered a weakness, and that he has survived a thousand years is a tribute to his martial skill and his ruthlessness. He considers everything a potential weapon, not caring how an enemy dies, only that they do. [4c]

Whist defending the Phoenix Gate from the forces of Malekith, Tyrion fought a duel against and killed the Captain of the Black Guard also named Kouran. [5a]