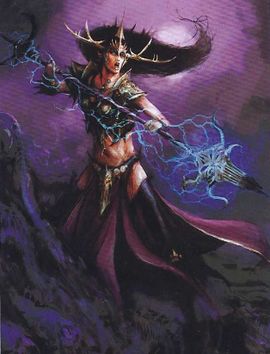 Dark Elf Sorceresses are invariably beautiful creatures who can curse and scorch the souls of their enemies and blight entire enemy armies. [1a]

The Prophecy of Demise has led to substantial restrictions concerning the study of magic in the kingdom of Naggaroth [1a]; officially only Dark Elf women may learn and study the secrets of magic, becoming Sorceresses. A high Sorceress is one of the most powerful and feared individuals in the Dark Elf empire. [1d]

Following a policy of divide-and-rule, Morathi uses the Dark convent as a counter-weight to the cult of Khaine [1b]. This has led to a centuries-old rivalry between the two organisations. [1a].

It can be considered a single unified organisation headquartered in Ghrond, although there are in fact 6 convents presumably one for each Dark Elf city.[1b][1c] Competiion for a place in the convent is both fierce and bloody. [3a].

Each covent is led by a High Mistress who carries a Black Staff, a potent magical talsiman as a symbol of their office. [1c]

When the elven civil war began, Morathi had already corrupted several mages of Saphery who turned against the others, befoe they were forced to flee following the Sundering to Naggaroth. Here they formed the Dark Covent where the most powerful and ruthless of the Dark Elf Wizards gather and learn to unleash their magics to the fullest potential. [2b]

They may use Dark Magic, Lore of Death and the Lore of Shadow. [3b]

A powerful sorceress is known as a Supreme Sorceress [3a] or a High Sorceress. [1d]

Any Dark Elf woman with ambitions to become a Sorceress will be submitted to 12 dangerous tests [1b][1e][2a]. If she prevails she will ritually marry the Witch King. Thus she is unable to marry or bear any children [1b][1c]. She is also obliged to join the Dark Convent of Sorceresses.

Nevertheless male sorcerers do exist and by keeping a low profile may even prosper in the kingdom of Naggaroth, although they are under constant threat of a bloody execution or worse. [3a]

Eldire, the mother of Malus Darkblade, was able to marry and to bear a son. However she was a war prize of Lurhan, the Vaulkhar of Hag Graef. In other words: She is an exception to the rule.Needs Citation