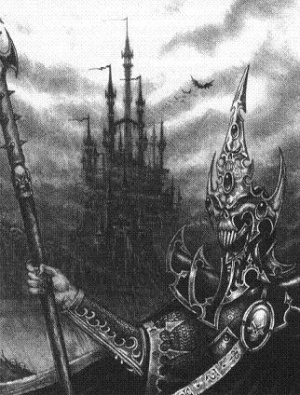 The Black Guard of Naggarond, or simply the Black Guard are Malekith's personal army, marked by Khaine and answerable to no other save the Witch King. [3a]

The Guard are recruited from the offspring of families high in the Witch King's favour, taken at birth from mothers who are soon thereafter put to the sword. With no family ties left to distract them, the children are raised within the barracks of the Black Guard and taught the myriad skills of death and destruction that are required of Malekith's foremost elite. As soon as they are able, these young warriors are pitched against each other in murderous fights to the death, so that only the strongest, quickest-witted and most merciless survive. This violence is not restricted to the training fields and arenas. An intake of recruits can lose up to half number as the incautious, injured and unpopular are disposed of by their fellows.[6a]

As they mature, these fledgling fighters are regularly visited by the Witch King, who lavishly rewards those who show great cunning and bloodlust. When the aspirants finally come of age and their training is completed, Malekith pledges each of them great wealth and lands, which will be theirs if they serve him well for two hundred years. Those Black Guard that survive their arduous tour of duty go on to become rulers of cities, leaders of armies and favoured members of the Witch King's court. However, this promised generosity seldom requires fulfilment, for there are many ways to perish in Malekith's service — not least as scapegoat for his frustrations. Yet if the risks are great, then the rewards are greater still, and so every member of the Black Guard serves without faltering until death claims him.[6a]

They are a bulwark of grim steel on the battlefield, holding their ground where all others have fled, fighting with a determination fit to transform defeat into victory, and victory into a glorious massacre. The barracks of the Black Guard are divided into twenty Towers, which compete against each other in contests of war and torture. The Witch King grimly encourages competition between the Towers, and each year, at the beginning of the Season of Blood, a tournament is held to determine which Tower will hold dominance over the others for the coming year. The leaders of these factions are the Tower Masters, veterans of the Black Guard so inculcated with death and battle that they choose to continue in Malekith's service after their two centuries of duty have been completed. These hardened warriors rule their underlings with a will of iron, determined that their Tower shall not be shamed by a lack of discipline — or worse, a glimmer of mercy — on the part of their charges. [6a]

During the End Times, the Black Guard and the Phoenix Guard were united to form Malekith's personal elite regiment, the Shadowfire Guard.[2]