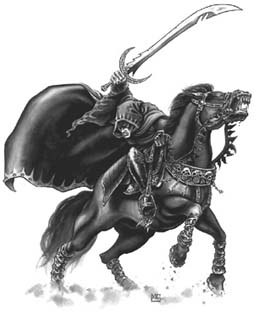 They are known as the heralds of Naggaroth, for they are often found scouting ahead of the army. Their Dark Steeds are very fast, ensuring that the Druchii riders can easily charge the enemy with their spears, then pull away when they are threatened. However, they don't need to charge the enemy to cause destruction as they are also armed with repeater crossbows and combined with the famed Elven accuracy and swiftness of their steeds, this creates a deadly combination. [1]

In the time before Ulthuan was invaded and devastated by a Daemon invasion, Nagarythe born scouts rode across the continent on swift steeds as messengers and scouts, looking for signs of incursions by the neverborn creatures of Chaos. They invoked the god Nerthu, wearing black feathered cloaks hoping that the raven god would hide them from their enemies. [2a]

Much later, during the Sundering they were found riding beyond the army of Nagarythe, bringing terror and confusion as they burnt settlements and drove the survivors into the wilds. They still perform this task but also act as messengers between the great cities of Naggaroth whilst in battle they erupt from flanking rides to slaughter war machine crews or devastate their supply lines, enjoying the panic of their fleeing victims. [2a]