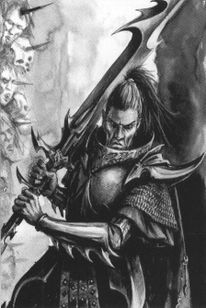 Tullaris Dreadbringer is the captain and one of the first of the Executioners. He is one of the most skilled warriors in Naggaroth and is feared throughout the Old World and the New World. [3a]

He is known as Drakiur, the Dread-bringer by the High Elves. [3a]

Tullaris became an executioner after a great battle at Har Ganeth while the city celebrated by watching the executions of captured High Elves. Tullaris was in the crowd when he heard Khaine beckoning him. He leapt up the steps of the great temple and slew one of the prisoners with his Draich, covering himself in their blood.[3a]

The executioners saw talent in him and taught him how to slay any creature with a single blow, how to make a prisoner give up any information they have within seconds. Hellebron thinks of him as her own but he belongs to no-one but Khaine who revels in seeing his warrior carve up innocents. [4c]

Horrible stories of the executioners are told by the fireside to frightened children everywhere, and whenever someone finds out that Tullaris is in an army they flee for their lives in his wake.[1a] He butchered the inhabitants of an entire town of the Empire because he did not like the name. [1a][2a] When Orcs of the Rusty Cleaver tribe tried to ambush him they were slaughtered and their skulls taken to adorn his palace. Capturing a band of Shadow Warriors near Anlec he nailed their body parts to the eastern gate of the old fortress. [3a]

He was part of and the leader of the first Executioner bodyguards of Hellebron when she visited Naggarond. [3a]

Malekith has realised that he is a true herald of the God of Murder, but has not acted against him, unsure who Khaine would support. For his part, Tullaris waits for Khaine to tell hime to strike against the Witch King.[4b]

More than six months after the Battle of Finuval Plain he led a force to Nagarythe in search of the Chalice of Khaine, lost thousands of years before. At first all went well, but the Shadow Warriors began to take an increasing toll of his followers. A army led Prince Eldyr and Prince Tyrion fell upon them and although Tullaris brutally slew Eldyr, Khaine himself spoke to him and commanded that he leave his followers to his fate. Even as they were slaughtered by Tyrion, he slipped away into the mists, shielded by his god and headed for home. [4a]