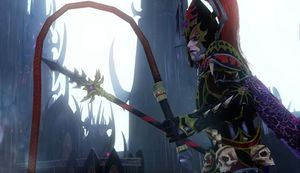 Beastlord Rakarth of Karond Kar, is the greatest of the Dark Elf Beastmasters.[1a]

Beastlord Rakarth is the most accomplished Beastmaster in Naggaroth. Even as a child Rakarth had an almost supernatural ability to subdue wild creatures. When Rakarth was only eight years old his father had been gifted with a particularly fine Dark Steed. The beast was called Bracchus and was faster and stronger than any other in the Rakarth stables, but it had a vicious temperament and would buck and rear uncontrollably if anybody tried to ride it. Rakarth's father attempted to break Bracchus, and was quickly hurled to the ground and almost trampled to death under the creature's hooves.[1a]

Wild with fury, Rakarth's father ordered Bracchus destroyed, but Rakarth strode forward and asked if he might have one attempt to ride the creature, and that if he succeeded he might keep Bracchus for himself. Rakarth's father readily agreed, for Dark Elves love all forms of gambling, even above the safety of their own children. Rakarth walked slowly towards Bracchus, fixing the steed with his steely gaze. Bracchus was visibly shaken at the young child's ice-cold stare, recognizing instinctively that here was a being that out-matched it in sheer cruelty and ability to inflict pain. Lowering his head, Bracchus allowed Rakarth to jump easily on to his back, and meekly obeyed Rakarth's every command. From that day on Bracchus was Rakarth's faithful mount, serving him well until he was slain at the Battle of Finuval Plain some 30 years later. [1a]

The Black Dragon that Rakarth rides into battle now is also named Bracchus in honour of the steed that he rode as a youth.[1a]

Rakarth led an entire army comprised of horrific monsters and Dark Elves, ravaging the lands of Norsca and culminating into a massive siege of Brionne in Bretonnia, where he faced the army of the famed hero Duke, Corentin.[3]