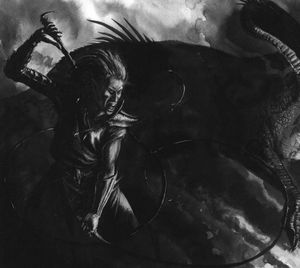 Since the distant days of Nagarythe, the Dark Elves have been experts at bending beasts and animals to their will.

However, some show exceptional aptitude in this, and can command even the unruliest beasts with a single word. They are the famed Beastmasters. When a child shows talent for taming animals he is sent to the city of Karond Kar to study under the masters who dwell there.[2a]

The Beastmasters of Clar Karond and Karond Kar can command even the wildest creatures to do their bidding. In part, this mastery springs from their unflinching dedication to the tormentor's craft, but brutality alone would be worthless without a Beastmaster's innate empathy. All Elves share a mystical attunement with the natural world, but while most embrace this bond to gain greater wisdom and fellowship with other living creatures, Dark Elves, and Beastmasters in particular, employ it as another weapon in their arsenal of torment. It matters not whether the beast is a raging Manticore, a cunning Harpy, or the wisest of all Caledor's ancient Dragons: eventually, all submit to the Beastmaster's will, or perish under his lash.[3a]

As well as commanding beasts they learn to manage the slave stock of humans, Orcs and other races becomming experts in getting the best from such creatures. [2a]

Some beastmasters will venture out into the wilderness on Scourgerunner Chariots searching for new creatures to capture and train for their is an insatiable need for them in Dark Elf society - the battlefield and the arena claiming many. They also mount them when going to battle, seeking prizes amongst their enemies to enslave and break to their will, if none are present they will take out their frustration on their foes. [3a]

In WFB 3rd edition, they were called Whelp Masters rather than Beastmasters. [1a]