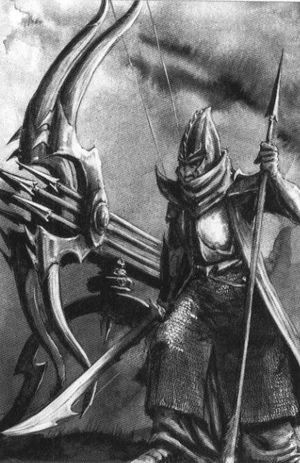 The Reaper Bolt Thrower is a war machine used by Dark Elves. [1]

The Elves have never developed or needed gunpowder weapons, having perfected the torsion powered bolt thrower. [3a] This Druchii mechanism is incredibly versatile, as capable of showering the enemy regiment with the barbed bolts, as it is capable of downing a Giant with a longer, well-placed missile.[1][3a] Those unfortunate few only wounded by the bolts are maimed by the brutal barbed missiles are worthless as slaves and so are given to the Witch Elves or left to bleed to death. [6a]

They are mounted on Dark Elf warships, from the mighty Black Arks to the skiffs and fast galleys that often accompany them. [4a]

The Bolt Thrower has a crew of two Dark Elves. [2a]