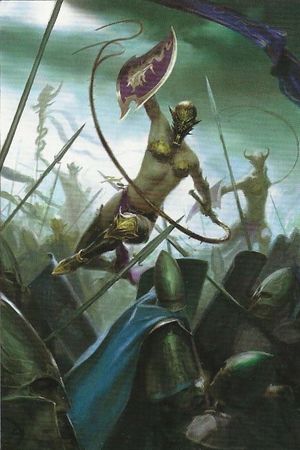 The Sisters of Slaughter are first amongst the gladiatorial guilds, the undisputed queens of the arena. [1a]

The Sisters fight as they live, moment to moment, with every gut-spilling swipe and viper-quick slash going unplanned until the second it is unleashed. Those who have no seen the Sisters of Slaughter at their quicksilver trade mock their talents, refusing to believe that mere instinct -- however finely honed -- could replace discipline and training. Such doubts last only until the naysayer witnesses a lone Sister hack her way through a trio of captured Daemons, or sees a handful of gladiatrixes fell a raging Chimera with an attack pattern that is as sublimely artistic as it is impossible to predict. [1a]

Once they numbered merely a dozen, outcast daughters of a disgraced noble house who pledged their lives to god Eldrazor, the Lord of Blades, so that he might look favourably upon their quest for revenge. Now, with their vengeance long ago carved into the bones of their family's betrayers, the Sisters have thousands of experienced fighters spread amongst enclaves in all the great cities, and a legend that has reached even the shores of distant lands. As for Eldrazor, he is greatly satisfied with the results of his patronage -- ever the half-forgotten outcast of the Elven pantheon, his power has grown much with the Sisters' rise.[1a]

Most Sisters live their entire lives in the arena, performing bloody deeds of battle for the baying crowds. There comes a time for many, however, when the ritual of arena combat becomes staid and unfulfilling. Thus, a fortunate Dreadlord can find himself approached by a band of Sisters seeking to test their skills on a real battlefield. Few commanders find it possible to reject such an offer, for the Sisters demand no plunder in return for their services, only the promise of a foe that will truly test them. So it is that many a Dark Elf raid is headed by gaily laughing warrior-women who dance into battle with ferocious grace. Most foes, trained for the battle of regiments and shieldwalls, are easy prey. The Sisters do not slow their approach as the enemy looms, but vault sure-footedly over the locked shields to throw themselves, weapons swinging, into the formation's heart. Moments later, the surviving foes cast down their weapons and flee, their will to fight broken. The Sisters of Slaughter are no longer concerned with them. Eyes glittering with battle-joy, they run towards the next foe, eagerly searching for opponents worthy of their skills.[1a]