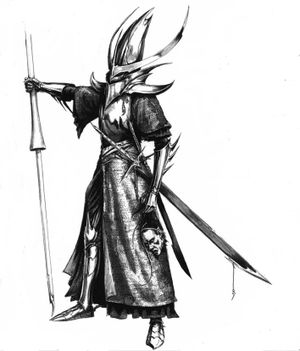 Lord Yeurl is a Cold One Knight and Dreadlord of Clar Karond. [1a]

Leading a raid on Bretonnia, his forces were intercepted by a army led by the local Duke. Noting that the open field favoured the large amount of enemy cavalry, he commanded that the 500 slaves he had collected thus far released - then had them killed with missile fire as they ran for the Bretonnian lines, killing the last survivior himself with a crossbow bolt. The resulting mounds of the dead chnaged the terrain and he ordered the attack, killing the Duke himnself in single combat. The surviving peasents and men at arms were then rounded up to replace the slaughtered slaves. [1a]

In battle he wears a double swords as a sign of his noble birth and has a trophy head bound in thorns as a symbol that he claims the soul as well as the life of his enemies. [1b]