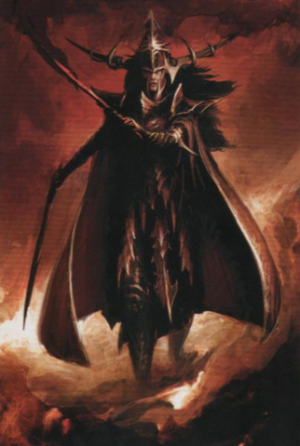 Dreadlords are sycophantic schemers to masterful strategists, noble-born rulers of Naggaroth who have waged war across a hundred battlefields. Each pursues their own unique enthusiasms and ambitions and each is without exception a selfish, deadily individual possessed of an arrogance matched only by their martial prowess which has been honed over centuries of unceasing war. [1b]

In battle, they seldom lead through personal example, preferring bloodshed and intimidation as in Naggaroth, respect counts for nothing unless it is backed by fear. The lower born of Dark Elf society consider it better to die at the hands of an enemy than to face the wrath of a disappointed Dark Elf lord. Often enemy will at least grant them a swift death and at worst have little prospect of making your family pay a blood price any percieved failure of their kin. [1b]

Many Dreadlords owe their positions of power to blood heritage, daring exploits or even the Witch King's mercurial favours. A few are granted temporary power by means of a writ of iron -- an edict granted by one of the six lords of the great cities of Naggaroth. Any who bears a writ of iron shares the sponsor's authority -- a powerful but double edged blade for the ambitious for should they fail in his appointed task, or show cowardice whilst acting in his sponsor's name, the writ will be melted down and the molten remains poured down their throat! [1b]

Comprising exactly one hundred lords and ladies, the inner circle of the Witch-King's most favoured includes many Dreadlords who each have a seat at the obsidian table - a dangerous but much sought after honour. After meetings with their master, it is not uncommon for a need to replenish the ranks! [1c]

A lower ranking Dark Elf noble is known as a Master. [1b]