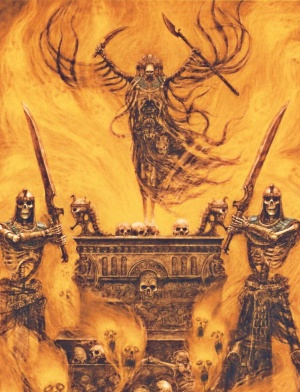 The Casket of Souls is a Tomb Kings creation, that stores the living souls of those who commit sacrilege to the owning Tomb King. [2a]

The trapped souls are unable, yet desperate, to escape and the only time this is possible is when the casket is opened from the outside. They then feed on the souls of the living, draining their bodies of life and drawing their souls into to the casket.[1][2a]

These caskets reside in the tombs of the mightiest kings of Nehekhara and are sealed with pitch and inscribed with warnings. Once opened, a blinding light is emitted and thousands of condemned souls scream forth, causing all who see this to age and wither in a heartbeat before their souls become entrapped within the casket as well. Only if the casket is destroyed can the souls be freed from their maddening existence.[2a][3a]

Rather than being carried into battle, a casket is summoned by the Keeper of the Casket, his incantation bringing forth a fountain of skulls that forms into a mound and then reveals the casket complete with guardians. [3a]