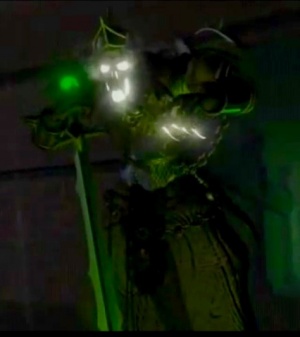 One of the original Dark Lords of Nagash, the Dread King was a mighty undead being of Nehekhara. A powerful warrior and practitioner of necromancy, he would become one of the most feared and mysterious beings to have ever existed.

The being known as the Dread King was known to have been one of Nagash's most powerful followers, aiding him in his early attempts to bring undeath to the world, he served Nagash well and was rewarded with an aura of dread and a mighty undead dragon. At some point after Nagash fell, he was killed and entombed within a pyramid in Nehekhara.[1],

The Dread King would eventually awaken, thousands of years later and leading a massive force of undead. All were drawn to his power with even Mannfred Von Carstein pledging allegiance to the former Dark Lord. Many other mighty beings joined the ranks of the Dread King, including another former Dark Lord, the Hand of Nagash and the powerful Black Grail Knights. [1],

The Dread Kings name was derived from a powerful aura that surrounded him at all times, only the mightiest of beings could face him without physically shaking or panicking, most would be frozen in fear or outright flee from his presence. The undead in contrast would be empowered by this aura, becoming stronger and more resilient. [1],

The Dread King was also a mighty warrior, giant in stature, armed with a massive sword and covered in ancient heavy armour. He could cut down his enemies in their droves. He was also a powerful practitioner of Necromancy, writing the book known as the Grimoire Necris, which also allowed his ascension to undeath.[1],