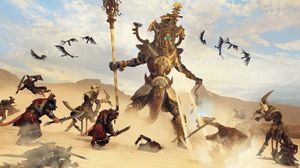 Orignally created to stand guard in the uppermost chambers of the Tomb Kings and to act as spirit guides to assist them in their journey to the Realm of Souls from the mortal world. Each towering effigy was sculpted with gold and gems with a staff bearing the symbol of the Sun God and a pair of scale in its other hand. [1a]

When King Ushtep of Rasetra and King Imanotep of Mahrak fought in a giant crater between the two cities they discovered that they were two well matched and both blamed the gods for the joyless experience. Unfortunately for them they spoke their words before a half buried Hierotitan, transporting their curses to the gods themselves. Angered, the gods cursed the kings to wage endless war upon each other and for 3000 years they have fought, a hundred hierotitans gathered on the crater's edge to watch, the gods themselves seeing through their eyes. [1a]

A ancient priest of the Mortuary Cult is interred within its chest, one who died before the secret of immortality had been discovered. The Hierotitan views the world as some form of dream, acting as a link between the Realm of Souls and the mortal world. [1a]