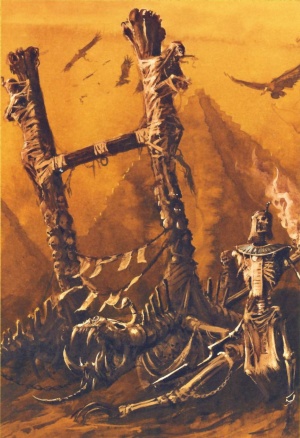 Screaming Skull Catapult is a Tomb Kings war machine that is literally made out of bones.[1]

The main framework consists of monstrous creature bones, while human bones are used for reinforcement, with the whole machine bound together by leather straps.[1]

Not only is it made out of bones, but its ammunition are skulls, sand-polished for extra terrifying effect. They scream as they are launched through the air and they explode at impact because of the Undead sorceries. The Undead crew has had centuries of experience, meaning that skulls almost always find their mark.[1][2a]

Behedesh, the king of Zandri is said to be the first to use this form of war machine both in the field and on his fleet of numerous war galleys. [3a]

When engaging enemies on the far side of the River Mortis, he gathered a great many of his catapults and had them fling the enchanted skulls of the rebels. Their hideous scream at the moment of execution had been captured and was unleashed as they flew through the air. Following this victory, Behedesh ordered that the heads of rebels be preserved for use in the catapults. Approaching death, he further ordered that the catpault be buried for use in the world beyond life. [3a]

Many were later looted by other kings. [3a]