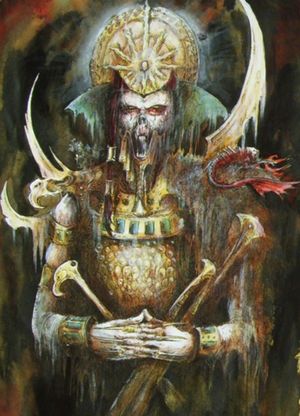 King Amanhotep, the High Handed Avenger of Zandri is a Tomb King. [1a]

He is known as one of the most unforgiving and spiteful of the ancient undead lords, and was said to be miser in life and now a madman in death, knowing the location of every jewel and coin in his empire. [1a]

After Zandri was raided by Captain Jaego Roth, he vowed revenge and calling for his mighiest war barque - the Curse of Zandri, had it taken apart and enhanced with the tombs desicrated by the priate lord. Further more, Liche Priests and Necrotects bound armoured titans to its side, reforged the Great Blade of Kharpresh and into an arching structure fitted the Jewel of the River Mortis, an artefact of the Sun god Ptra. [1a]

Learning that his pirate prey was on his own vengeance driven quest, Amanhotep sailed to the Galleon's Graveyard and made an alliance with Count Noctilus. [1a]