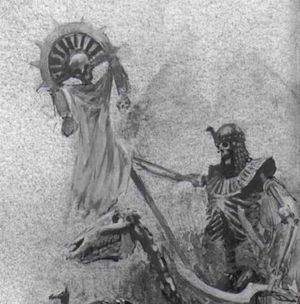 A Tomb Herald or Icon Bearer is the trusted champion of a Tomb King. [1a][3a]

They are the most loyal and trusted bodyguards of the Tomb Kings. Such is their devotion that they were mummified with their masters. After awakening, a Herald will continue escorting the King in the same way as he did in life.[2]

The greatest of a kings Tomb Guard was given the honour of carrying their rulers icon into battle. In addition they would act as a herald and envoy, dispensing justice in his name and carrying his commands across his realm. A dispute between kings could be settled by duels between champions and an Icon Bearer was often called upon to fulfill that role. [1a]

To disobey the words of a Herald was considered treason and often resulted in death at their hands. [3a]

Each banner is a priceless artefact inlaid with jewels, gold and lapus lazuli with images of immortality and death as well as pennnts proclaiming the victories of the ruler. Legends say that the breath of the old gods of Nehekhara fell upon these ancient banners and they are certainly powerful magical relics. [3a]

The Heralds are often entrusted with the king's banner; however, none of them will let it distract them from their most important duty. Should the enemy be about to end his master's existence, the Tomb Herald will sacrifice himself to save him, safe in knowing that his death will be avenged many times over.[2]

When they were entombed, the golden armour of a herald was placed over his death shroud and his enchanted blade left in his hand. [3a]