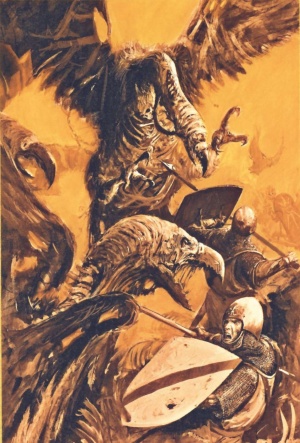 A Carrion is a giant Undead bird. [5a]

Several of these are always in the skies above Nehekhara, watchful for any mortal intruders. Even though they cannot actually see, they can still hunt, with incantations of Liche Priests reliably guiding their spirits towards warm prey.[1]

Of course, should the Tomb Kings go to war, Carrions will join their forces and patrol the battlefield. They tend to hunt for individuals who will pose little physical threat to them, such as isolated wizards and war machines, at which point they throw them into the air and tear them apart.[1]

As living creatures they were notoriously cowardly and still look to hunt down the weakened or wounded. [5a]

Carrion originally dwelt in the Worlds Edge Mountains to the east and deserts to the west of Nehekhara and who were killed in the first incursion of Chaos. [3a] [5a]

Living Carrion birds have died out over time and only those reanimated by the Liche Priests fly now. They were first used by King Nekhef I in ancient Nehekhara and all kings since him have had their carcasses buried in their tombs. Now their corpses await the call from the Liche Priests before taking to the sky to spread fear and destruction against their foes.[2a]

Part of the invocation used by the Liche Priests at the Temple of the Sun in Khemri to awaken the Carrion is: The Carrion of the Desert, whose mighty outstretched wings darken the noon day sun on the day of slaughter [5a]

Carrion were considered messengers of the god of Scavengers, Ualatp and that they would bear the lost spirits of warriors into battle against the Daemons of darkness. Many thousands were entombed by the Mortuary Cult in the pyramids of the Tomb Kings. [5a]

Orginally in 3rd and 4th Edition they had parastic spirit riders who grew more powerful with every kill they made. [3a][4a]