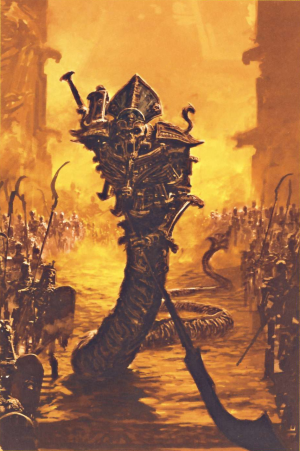 Sepulchral Stalkers are horrifying snake-like animated constructs created by the Tomb Kings. [1a]

A Liche Priest must collect the pieces of a fallen Nehekharan warrior and under a full moon, scatter the fragment on the ground, throwing powdered bone into the wind as they chant the appropriate incantation. As they complete the ritual, they throw the eyes of a Cockatrice into the sand and wait for the offerings to sink into the sand, binding the warrior spirit to the statue. [1a]

Originally created to the delineate the borders of a kingdom of Nehekhara, most have been long buried by the sands of the desert. [1a]

They don't advance towards the enemy like Ushabti or Warsphinx; no, like the Tomb Scorpion, they lie patiently in wait beneath the shifting desert sands until they sense trespassers passing by. They then spring out of the sand and impale their hapless prey upon their ornate staves before they even have a chance to realize that they're under attack. As such, they are generally used against small groups of important enemies, war machines being the prime target. [1a]