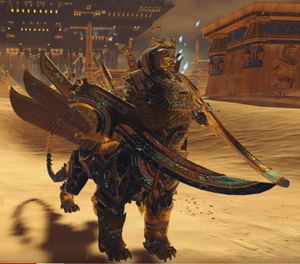 The Necrosphinx is an enormous Tomb Kings creation, that glides through air before landing amidst its mortal foes, skything down all before them with disturbing ease. It will completely exterminate them before leaping in the air and gliding again, ready to slaughter all pathetic mortals in its way.[2a]

The Necrosphinx is a truly bizarre creature. Sculpted with the features of many different mythological creatures, it has the torso and face of a man, the body and paws of a fearsome desert lion, the tail of a scorpion, and a pair of ornate wings to mimic those of the falcons of the underworld. The Necrotects of ancient Nehekhara believed that by combining these forms they could create the ultimate warrior, one who could destroy all their enemies. However, the Mortuary cult disagreed, believing the creatures to be an abomination in the eyes of the gods. After a century of famine and plague, the superstitious kings were forced to agree. None dared to destroy the Necrosphinxes, for fear of angering the gods of the underworld, so they were instead buried in vast pits and forgotten.[2a]

They remained buried for a milennia until Settra himself ordered the Necrosphinxes to be unearthed to combat a mighty Orc Waaagh! that was sweeping across Nehekhara from the Badlands. [2a]

The Liche Priests do not believe the Necrosphinxes to be animated by the soul of a great warrior like the other War statues. Rather, they believe that the sinister gods Pha'a and Usekph breathed life into these creations, having found a way to vent their fury upon the world of the living.[2a]

While it is truly devastating against regular warriors, it is unspeakably foolish for an enemy general to assume that it can be easily defeated with another monster. Those blades that scythe down infantry like rye are powerful enough to instantly decapitate anyone in their path, be it Giant, Dragon or Hydra.[1]