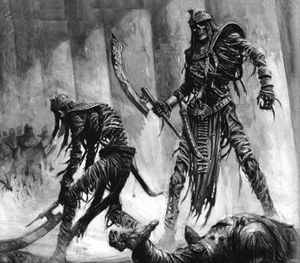 The Tomb Guard are the Tomb Kings' most elite warriors with the centuries of experience, given the honour of mummification. [1a] [2a]

An especially brave and loyal Tomb Guard can become a Icon Bearer for their ruler. [1a]

In life the best and bravest soldiers of a rulers army were able to enter the Tomb Guard, living in comparative luxury, a dozen slaves assigned to tend their wargear so they could focuss on their duties. In death they were further honoured by being allowed to share, to a certain extent their masters immortality. [2a]

In life they guarded the King's palace and in death the inner sanctum of his necropolis being buried in the pyramid itself. To gain this honour and sharing his immortality, they were inspired to greta acts of bravery, charging against hopeless odds and making heroic last stands. [1a]

Their mummification was not as complete or as elaborate as that which their royal charges werre given but they did retain their golden decorations, fine weapons and armour. Their sarcophagi stand upright around the royal tomb chamber where they can quickly arise to defend their lord. [1a] [2a]

They have proven their worth in countless battles, with quicker reactions, harder bones and greater skill than the regular Skeletons.

They are clad in heavy armour and often they wield deadly halberds. A single strike from their weapons is often enough to literally drain life from a mightiest creature due to the incantations of cursing imbued within them. [1a]