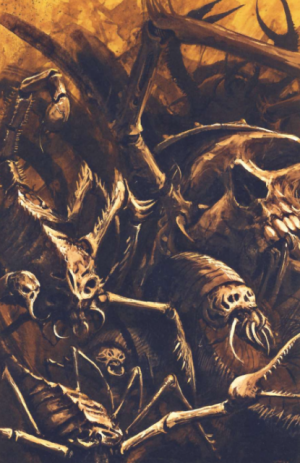 A swarm of undead insects.

Tomb Swarms are the reanimated husks and corpses of countless poisonous insects and other vicious creatures of the desert, brought to life to infest and protect the resting place of the Tomb Kings.[1a][2a]

Though long dead, the mere presence of the Liche Priests and Tomb Kings fills their empty shells with animation, and they scuttle from their hiding places around the mortuary temples and beneath the scorched sands. The Liche Priests have long since gained mastery over these creatures and can summon them forth at will through their magical incantations.[1a]

Thus, when the Tomb Kings' legions stride to war, they are accompanied by a scuttling swarm that spreads across the land in a black tide of crawling bodies. Those foolish enough to stand against a Tomb Swarm will drown beneath an unstoppable wave of Undead beetles, biting, clawing and burying themselves into the warmth of living flesh. Victims who gasp for air or cry out in fear are quickly silenced as a deluge of insects surge down their screaming throats, muffling cries of pain as they are devored from the inside out.[1a]

Tomb Swarms are drawn to the magic animating the Undead, but it is to the Liche Priests and Tomb Kings that they are most keenly attracted. Not possessing a spirit of their own, they are easily controlled by the implacable will of the Tomb Kings. Left to their own devices, they revert to an instinctive lurking behavior, making them ideal guards for the pyramids of slumbering Tomb Kings. Trespassers foolish enough to dislodge a capstone will find themselves quickly overwhelmed by a surging swarm of creatures. They are drawn to the warm blood of the living, trying to feed a hunger that no amount of flesh can ever sate. A Tomb Swarm's victims, poisoned by hundreds of bites and stings, are rapidly devoured as the vicious creatures quickly consume flesh, clothing and bone alike.[1a]

Of all the dead creatures that make up the bulk of a Tomb Swarm, two had special significance in ancient Nehekharan society. The flesh-eating, skull-caparaced Khepra Beetles were believed to be messengers of Usirian, god of the Underworld. They were his agents in the mortal world, and through their eyes would Usirian know the sins of all men. It was whispered that those who displeased Usirian were punished in death. Forbidden to enter the golden paradise of the afterlife, they were instead condemned to the lowest depths of the Netherworld where a hive of Khepra beetles would burrow into their immortal bodies and gnaw on their insides for all eternity.[1a]

The other creature of importance was the black-clawed Desert Scorpion. The scorpion is the form chosen by Sokth, the god of treachery and murderers. Ancient Nehekharans believed that the scorpion would not sting one of Sokth's murderous followers, so those accused of killing another were pushed into a pit of scorpions. If a victim somehow managed to survive his trial by scorpions and drag himself out of the pit, then it was taken as sign that they were indeed favoured by Sokth and hence guilty of their crime - the punishment for which was death by being thrown into a pit of snakes. Those who perished died in agony as scorpion venom coursed through their veins, but they were at least innocent.[1a]

There can be no escape from a Tomb Swarm, for the size of the creatures is such that they can crawl through the smallest of gaps without hindrance. Tomb Swarms can easily travel under the shifting sands of Nehekhara's desert and burrow beneath the feet of their unsuspecting prey. Without warning, a Tomb Swarm can erupt through cracks in the ground, flowing over the surface like a flood, dragging their victims kicking and screaming beneath the sands with the sheer weight of scuttling bodies.[1a]