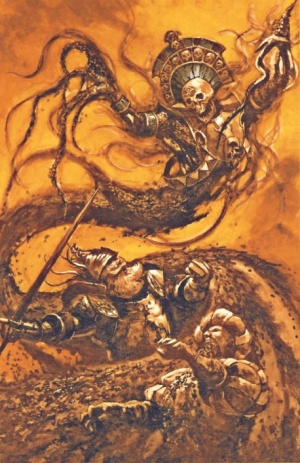 Apophas (also The Cursed Scarab Lord) was once a prince to the throne of Numas in Nehekhara.

He let his jealousy overcome him and he slit the throats of the other members of the royal family and proclaimed himself king in -1563 IC. He was not, however, universally adored, and the people of Numas rose up and dragged him to the temples to be judged. Regicide was the most terrible of crimes in ancient Nehekharan law and Apophas would not escape punishment because of his position. Where normally the bones of the criminal would be scattered across the desert, Apophas was entombed alive within a casket full of scarab beetles. His screams could be heard through the walls of the temple but eventually they subsided and the casket was opened. All that remained was a skull, not even the beetles were there. The skull was inscribed with a curse and thrown to the desert.[1]

Usirian, the Nehekharan god of the dead, claimed Apophas's soul on his death to torment in perpetuity however Apophas struck a deal with Usirian. He would find a soul of perfect match to replace his own, and Apophas returned to the realm of life as the Cursed Scarab Lord in -975 IC.[1]

Apophas appears as a flowing 'body' made of scarabs with only his skull as his remaining bone. He searches the world for the soul he thinks can set him free but in truth no two souls are the same, and he has cursed himself to an eternal hunt. Apophas's body can split apart and reform in a moment and no matter how hard he is struck, the scarabs simply reform over the holes made, pulling limbs back togeteher. Apophas fights with the same blade that he used to destroy the bloodline of Numas and it is this that he must use to kill the enemy who will replace him. When successful, he wraps their soul in a magical soul-cage and takes them to the underworld, where the soul is place on a pair of scales and measured against Apophas's own.[1]