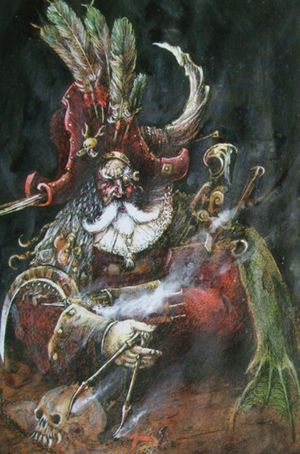 The son of the Sartosian explorer and cartographer Indigio Roth. [1b]

He was raised aboard the Enlightenment, a former warship permanently moored in the harbour after his father lost both legs fighting a Sea Giant. The ship was full of charts, maps and even rugs depicting exotic lands such as Araby, Cathay and Ind. Finally, he would leave home to become a renowned pirate captain, sending a dozen vessels to the sea bottom in his first year. [1b] [2a]

As he passed his fiftieth year, he began to tire of the pirate life and after a near-disastrous raid on Lustria he decided to spend his remaining days with his wife and child. [1b]

Returning home in the Nightwatch, Jaego found his home ravaged by a vast war hulk made of lost ships and a vast metal kraken. To his horror he discovered the his wife, child and father has all been killed during the raid. Laying them to rest he made a vow to avenge himself on Count Noctilus. [1a]

He spent his entire fortune recruiting a die-hard crew and then sought aid from the Empire and in particular from the Cult of Sigmar, enemies of the undead. Aboard the Nightwatch Jaego reached Altdorf and demanded aid of the Grand Theogonist himself - but he was refused as the Empire was already at war and the cults holy weapons were needed elsewhere. Enraged he boarded and stole the Heldenhammer, leaving his first mate Salt Pietr and a small crew abord the Nightwatch. As the equally enraged Imperial fleet pursued them they were caught between the massive batteries of the Heldenhammer and the guns of the Nightwatch, destroying several before the Nightwatch was sunk and allowing the Heldenhammer to escape. [1a]

Seeking gold to buy himself the fleet he needed, Roth set sail for Zandri and led three hundred of his crew into the ruined city, seeking treasure. As the dead rose against them, he claimed his loot and with the eighty survivors made for his ship which evaded the undead fleet sent in pursuit. His treasure bought him the services of the Golden Magus and the Pirate Queen Aranessa Saltspite. [1a]

Even more gold was spent pursuing rumours of the Dreadfleet and he determined that the raiders would next strike at Luccini, the birthplace of his mother and he berthed his small fleet with the Tileans and waited. Several weeks later, the uncanny vessels appeared and a raging sea battle ensued before the Dreadfleet broke off and melted back into the fog. Returning to Sartosa he came across a hulk of a Dwarf Ironclad, the Grungni's Forge and rescued the survivors. Its engineer captain, Red Brokk Gunnarsson pledged to aid him and bring his Grudgebreaker-class battleship, Grimnir's Thunder with him. [1a]

After provisoning his fleet at Barak Varr, his and his fleet sailed for the Dread Gulf. [1a]