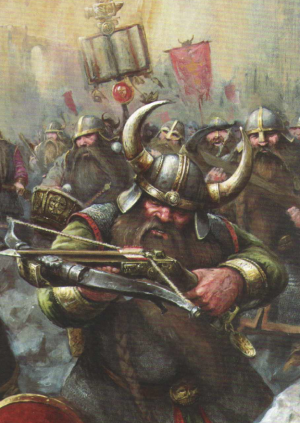 Quarrellers serve as dedicated regiments of heavily armored skirmishers and missile infantry for the armies of the Dwarfs.

Since the Dwarfs first settled upon the treacherous slopes of the Worlds Edge Mountains, the Dwarfs required a means to drive out the many ferocious beasts that occupy its peaks at a long and safe distance.

This dilemma has resulted in the creation of the first crossbow, as the traditional bows used by the High Elves were far too large to be properly used and lack greatly in proper hitting power. Such is the versatility of the crossbow that it had little need for improvements, as it had enough stopping-power to drop a Black Orc in its tracks.

When the clans are called to fight, some Dwarfs arm themselves with crossbows and join the battle as Quarrellers. These formations are tasked with raining bolts down upon their foes — a task they perform with orderly zeal. Quarrellers seek to thin down the enemy’s ranks, punish units attempting to outflank their own forces and engage in ranged duels with the foe’s missile-armed troops.

Dwarfs have never taken to bows, partly because they do not suit their short physical stature, but also due to the limitations of such weapons in confined tunnels. The powerfully built Dwarf Crossbow can easily fire shots that outdistance the puny bows used by Goblins, and the crossbow bolts pack enough punch to devastate even heavily-armored foes. With typical Dwarf precision, a unit of Quarrellers will unleash its hail of bolts, reload, take aim and fire again. Protected by heavy armor and their own sturdy constitutions, it is a rare day when an enemy — even one with more skilled marksmen than the Dwarfs — can win a long-ranged shooting contest against a unit of Quarrellers. Of course, should the enemy approach near enough to engage the Quarrellers in close combat, they will find hardened warriors eager to put their axes to work as well.

While the devotees to the handgun have grown over the years, they have not replaced the crossbow. There are many clans that prefer the range of the crossbow, while the most traditionalist simply rile against any form of technological progress and the regrettable lack of ‘elbow grease’ needed to fire a handgun instead of winding a crossbow winch to re-set its formidable shot. Not surprisingly, some of the less wealthy clans even grumble over the cost of black powder.