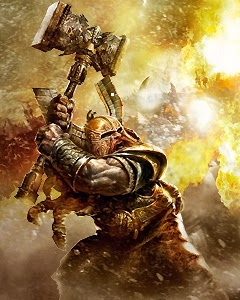 Dwarf Hammerers forms a Dwarf Kings personal bodyguard, chosen by the King himself. [4a]

They are individuals from different units, and perhaps even clans, who have proven themselves in uncountable battles, showing not just great strength and deadly martial prowess, but also steadfast loyalty and a bold and courageous nature. They are formed into a hard-hitting shock unit, a force capable of breaking enemy formations the way a heavy warhammer crushes shale.[4a]

In addition to being a formidable fighting unit, the Hammerers are often used as a Dwarf Thane or Lord’s personal bodyguard. Duty to a liege is a sacred thing to Dwarfs . An individual bound by oath to his Lord will fight all the harder, and for the leader of the throng, a Hammerer will gladly give his life rather than face the dishonour of failure. A king surrounded by his Hammerers is the keep in the centre of the throng: grim and unyielding, a living personification of the indomitable Dwarf spirit. Of course, the allegiance goes both ways, and it is a Lord’s duty to properly equip these hand-picked units and to seal the oath between them.[4a]

The symbol of the bond between a Lord and his Hammerers is the weapons they carry. Each is given a heavy, but perfectly balanced, great hammer, which is often made of gromril. Outfitted in heavy, well-polished Dwarf mail, Hammerers wade into combat wielding their great weapons. They swing their hammers in sweeping arcs, hitting their enemies with such vigour that only enchanted or hell-forged armour can withstand the force of their blows. With a cracking and crumping, the whirling hammerheads send up gory debris, as splintered shields, cracked bits of armour and even heads or limbs are thrown into the air by the sheer force of the impact. Dwarf battle lines have been known to cheer at the sight of the great hammers rising and falling around their king’s banner, beating out a rhythmic noise that is not unlike the deep-booming industrial sounds made by the vast drop hammers found in the larger Dwarf forges.[4a]

It is said that Hammerers were first appointed as royal bodyguards to King Morgrim Blackhand in -1245 IC and that Kadrin Redmane was the first Hammerer. Kadrin was a crafstmen when the king was visiting a gold mine to bolster the morale of the workers following numerous Goblin raids when a horde of Night Goblins attacked. He reacted first as the warriors guardng the king were overwhelmed, and he charged the invaders, swiftly joined by many other smiths in the forge saving the king who later rewarded him with a Rune Hammer and since that day Hammerers have guarded Dwarf kings. [2a][6a]

As the most elite warriors, Hammerers enjoy a high status within their hold. When not personally shielding their Thane or king, they are tasked with guarding key elements, such as the throne room or front gate. Larger strongholds will have many regiments of Hammerers, and these often become known by the name of what or whom they guard, such as the Peak Gate Guard of Karak Norn or the Drakebeard Guard, the Hammerers assigned to guard Thane Ull Hammerhand of the Drakebeard clan in Karak Kadrin.[4a]