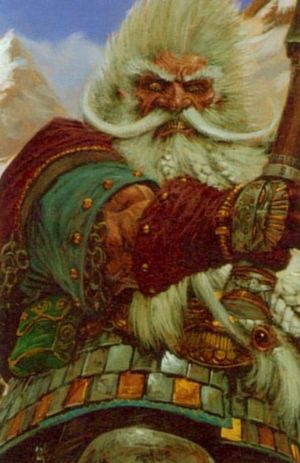 He forged an alliance with the High Elves and together with Prince Malekith achieved many victories against the forces of Chaos, pushing back the minions of the Dark Gods from many areas of what is now known as the Old World. The two became close friends, having saved each others lives on a number of occasions. [1a][2a]

When Malekith departed, they exchanged gifts as Snorri feared they would never meet again - which proved true. One of these was a Ithilmar drinking goblet that Snorri favoured until he died. [1a]

In -2839 IC, The Phoenix King Bel Shanaar visits Karaz-a-Karak to renew the oaths of friendship with the king and between the two races. [2a]

It is said that Snorri had many runic items including even runic slippers and pipe but in those days rune items were relatively commonplace. [1b]