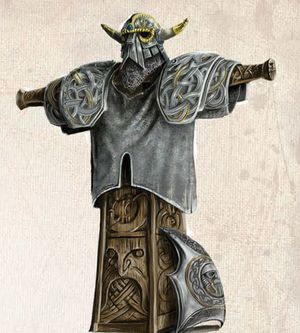 A suit of Gromril armour

Gromril, also known as Meteoric Iron or Star-Metal, is considered by many as one of the strongest and most valuable metals in the whole of the Warhammer World, rivaled only by the most ancient and powerful of Chaos Armour.

Unlike other metal, Gromril is not a metal born from this universe but falls to the Warhammer World through the Warpgates of the northern and southern poles. It was the Dwarfs who first discovered the metal in different places where meteors have struck the Old World. In fact, gromril is only found in the presence of Warpstone. The reverse, however, is not true. Raw gromril is a silvery metal that is incredibly rare and valuable and only the Dwarfs know how to work it. Gromril actually has more than one state. There are three methods of refining it and each method has different effects on the metal. The first method is widely known amongst the Dwarfs and turns raw Gromril into the refined Gromril that is used for coins, armor, shields, and weapons. This refined Gromril is sometimes called Mithril. The second method is not widely known among the Dwarfs and its secret is jealously guarded by the Master Smiths that do know it. This second method turns raw gromril into Adamant. The third method turns raw gromril into a crystalline metal known in legend as Laihtero.

Many times more precious than gold, Gromril is used to make the best armor and weapons for the Dwarf nobility, and for the elite military units such as the Ironbreakers who guard the gates to the Underway. Because of its rarity, the Dwarfs do not trade items made of Gromril with other races.

Gromril can be created into several types of metal, depending on the techniques that can make the metal even stronger or more potent then those of other metal.

Mithril is the most common form of Gromril. It is refined by smelting to remove most impurities. It is twice as durable as Steel and weighs one-fifth as much. It also accepts runes and enchantments as readily as any other metal.

Adamant is created using a refining technique which involves smelting and various other secret methods of purification. Adamant is normally magic-inert so therefore any person wielding an adamant weapon, adamant shield, or wearing adamant armor is immune to magic. There is a way to enchant adamant items so that their enchantments can be used like any other enchantments on weapons or armor made of other metals. These enchantments have historically been only of the kind that Dwarf Runesmiths make and must be placed on the item during the forging process. After the item is finished, its runic properties are "set" and can never be changed or added on to in any way. Whether these items would take enchantments from human wizards during the time of refining is not known and any suggestions that they would is pure speculation. Adamant weapons, armor, and shields are as durable and weigh as little as Mithril ones, with the added benefit of being immune from magical attacks.

Laihtero is the rarest form of Gromril ever known. In fact only one item is known to have been forged from it; Arianka's sword, Laihtendrung. Very little is known about this material save for what a few legends have to say on the subject. It is said that only one dwarf at any one time knows the secret of the refining process to create Laihtero from raw Gromril. It is also said that it would take the Dwarf his entire lifetime to finish it, for the forging process is indeed an extremely long process. Dwarf Loremasters have speculated that Laihtero is Law in its purest form and that it will not accept magic enchantments of any kind. It is a completely translucent metal and radiates Law to those beings who are sensitive to such things. It is also said that some essence of a God of Law is necessary in the refining process to create this metal. Laihtero is undoubtedly stronger than Mithril and Adamant and probably weighs even less. Due to its purity against all forms of magic, creatures that are imbued with the taint of Chaos are far more sensitive to its strokes then any other types of metal.