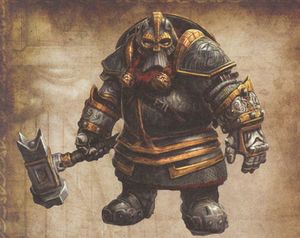 Ironbreakers are amongst the most heavily armored warriors fielded by the armies of the Dwarfs. Clad from head to toe with full suits of magnificent Gromril armor and Rune weapons, these warriors are considered by many to be the elite of the elite.

Many Dwarf strongholds have deep tunnels which the Dwarfs have long since abandoned. These tunnels have become home to all kinds of monsters such as Night Goblins, Skaven, Trolls and even more sinister horrors.[2a]

Where old and abandoned workings join the inhabited levels the Dwarfs have docked passages and built gates, but even so they must be constantly on the lookout for intrusion from below. The Ironbreakers guard these old passages and protect the stronghold from attack. They spend much of their time below ground in the deepest, least-visited parts of the stronghold. Because of the extreme danger of their duties they wear heavy gromril armour engraved with runes.[1a][2a]

All manner of fell creatures lurk below a Dwarf Hold and the Ironbreakers guard the deep abandoned tunnels from those that would otherwise invade the hold. They spend much of their time below ground in the deepest, least visited parts of the stronghold. In these dark places, ambush and rockfall are commonplace hazards and survival is often dependent on wearing the right armour. Accordingly, Ironbreakers wear fine suits of gromril armour, crafted by the smiths of the hold and worn as a badge of honour by this select band of warriors.[3a][4a]

They stand resolute, barring danger from advancing beyond their post. It is an honour to be selected to join the Ironbreakers, for they are trusted to protect the hold’s most vulnerable entrances. Only the strongest and bravest are accepted into their ranks, but the dark offers no vainglory, and those warriors who choose a path of greater ambition must seek out the Hammerers. To serve as an Ironbreaker, a Dwarf must take vows to stand bold, even if no king, Lord or Thane is near. Behind and above him are the beardlings, treasure troves, ancestral tombs, and the very halls that the forefathers of his race carved out of rock in ages past. Before and below an Ironbreaker will be only the dark, the all-consuming blackness that hungers to grasp everything into its clutches.[4a]

Ironbreakers are trained to fight in tight formations, wedged into the confines of narrow tunnels. There, they find defensible positions and let the enemy break upon their overlapping shields as waves crash into rock. Impervious, implacable and unmoving, they form a living fine, gromril-hard, that holds back the flood terror that lurks in the dark below. Enemies fall before their axes like winter wheat before the scythe and blows clang harmlessly off their nigh-impervious armour or are caught and deflected by their sturdy shields. Each regiment of Ironbreakers will have a veteran, a grizzled unit leader known as an Ironbeard, who knows the undertunnels like the back of his hand. It is an Ironbeard’s duty to manoeuvre the unit into a favourable position and to call out the battle formations, such as the box of iron, the steel square or so on.[4a]

Such is the reputation of the Ironbreakers that they will often be called upon to fight on the surface when the full might of a throng is mustered.[4a]