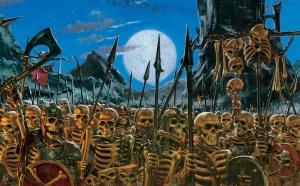 Skeletons are long dead warriors, raised by Necromancy to fight again in the armies of the Tomb Kings and Vampire Counts

For thousands of years, armies have marched and fought across the Old World. There is barely a field, hill or valley that has not seen fierce fighting at some point in the past. Going as far back as the time of Sigmar and even earlier, these great battles have left unmarked graves beyond counting. Such charnel fields attract Dark Magic, and the souls of some warriors remain trapped in the material realm. Some are the spirits of men betrayed by their commanders, others of cowards who were cut down as they ran, or of those who died a violent and unexpected death. Beneath the mud lie the grave-stained bones of these bitter, ancient warriors. Long held beneath the earth, they are clad in their corroded armour, their lifeless hands still gripping the swords, axes, spears and shields they held in life. Provided their remains have not been blessed by the rites of Morr, a Necromancer or Vampire can use the coiling energies of Dark Magic to instil a semblance of life and a flicker of spirit into these dormant warriors. [3a]

As the regiments of past massacres claw their way to the surface, their empty eye sockets glow with unholy power. Silently, they gather together in a semblance of their old ranks, mutely awaiting the commands of their new lord as the remains of their tattered banners flap in the unnatural breeze of their creation. Lipless horn blowers raise their instruments and sound a spectral, mournful dirge. organs to pierce, a well-aimed blow can destroy it. Dark Magic replaces flesh the long since devoured by the writhing creatures of the earth, but an arrow or sword thrust can disrupt the magic that binds the ancient bones of these soldiers together. Decapitation or severing of the spine is usually enough to release the Skeleton Warrior's spirit from the mortal plane, and a heavy blow from a bludgeoning weapon such as a hammer or a club can shatter a Skeleton into pieces. However, even those that are felled can be raised up again as necromantic power knits together shattered bones and instils them with unholy vigour once more.[3a]

All that these long-dead fighters can recall of mortal life are faint impressions from battles fought in ages past. All that they feel is the compulsion to fight and obey their masters. They have no autonomy or intelligence, though some vestige of their battlefield training remains ingrained in their bones. Driven by the undying will of a Vampire, these ragged warriors can still wield their swords and spears, and raise a shield to block an enemy attack. [1a]

A mortal who dares to fight an army of Skeletons is confronted by rank upon rank of ghastly apparitions. Who could remain unafraid with the soldiers of antiquity lurching towards him? [1a]

Skeleton Warriors of the Vampire Counts wear Light or Heavy Armour and Shields, wielding Spears, Hand Weapons, Halberds or Double-Handed Weapons. Some regiments carry Magical Standards [1b] and are led by Skeleton Captains. [2a] Some Blood Dragons have Skeleton Archers under their command, armed with a Bow and a Hand Weapon. [2b]