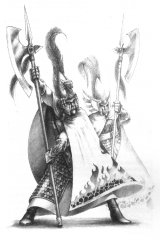 Two warriors of the Phoenix Guard.

The Phoenix Guard are the protectors of the Shrine of Asuryan, a great pyramid seen as the foremost temple to Asuryan, the elven creator-deity. [1b]

Within the chamber the past and future of the Phoenix Kings is written on its walls in flaming letters, and any who see it are granted knowledge of both future and past and of the moment of their own death.[1b] All who see the writing are bound by a magical oath of silence from which they are never released, meaning that Phoenix Guard cannot communicate with any other living creature. [2a]

Aside from protecting the Shrine of Asuryan, the Phoenix Guard will always appear when the current Phoenix King dies to bear his body away to the White Ship that will carry it to its final resting place. It is also their duty to attend to the candidate of the new Phoenix King before and immediately after he passes through the flames.[1b]

The oath of silence and service to Asuryan grants the Phoenix Guard a measure of direct protection from their god, causing enemy blows and missiles to be turned aside and the air around them to throb with divine power. This is a terrifying experience for any who stand against them. [1b][4b]

Only the Phoenix King himself can command the Guard and when they take to the field of battle, they are see is the instrument of the kings will. [5a]

Since the days of Aenarion, the Phoenix Guard have always number 10,000 - something that has led to speculation that they are either immortal or at elast able to raised from the dead. [4b]

Following the death of Bel Shanaar, the captain of the Phoenix Guard and the High Priest of the Shrine were part of the council that choose his successor, Caledor I. [1a]

In 2384 IC, Moraelir willingly stood aside as captain of the gaurd in favour of Caradryan seeing it as Asuryan's will. [4a]

During the End Times, the Black Guard and the Phoenix Guard were united to form Malekith's personal elite regiment, the Shadowfire Guard.

They wear cloaks of embroidered fire, echoing the sacred fire of their god. [3a]