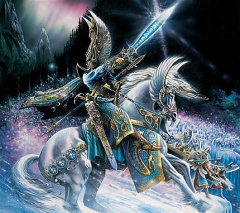 Tyrion is one of the greatest warriors and generals of the High Elves.

He is known to various races by names, titles and curses - to the Dark Elves he is the Reaper, to the Goblins of Red-Axe Pass he is Orcbane and to the Norse, Mankiller. [2b]

Unlike his brother, Tyrion is affected less strongly by the ancient curse. [2b]

Tyrion, through his father Arathion [1], is a descendant of Morelion, first-bon son of Astarielle, a past Everqueen, and Aenarion, the first Phoenix King. Thereby he is a very distant relative of both Malekith (Aenarion's second son by Morathi) and to Alarielle, the current Everqueen (who is a descendant of Aenarion's daughter Yvraine, Morelion's twin).

Prince Tyrion is, according to the majority of the High Elves, the greatest living warrior and General in Ulthuan, and possibly even the world. His twin bother, Teclis, is the total opposite of Tyrion, however. Where Tyrion is strong, tall, brave and handsome, Teclis is weak, dimuinitive, mockingly sarcastic and gaunt. But don't be fooled into thinking that Teclis is a complete waste of time, for he is one of the mightiest mages of the Warhammer world. Tyrion and Teclis played pivotal parts in the Great Chaos Incusion especially at the Battle of Finuval Plain. He is currently the champion and consort of the current Everqueen.

N'Kari, a Keeper of Secrets, runs amok in Ulthuan. It is speculated by many that he is attempting to destroy the lneage of Aenarion. N'kari is eventually brought to justice at the Shrine of Asuryan. In this battle, Tyrion and Teclis play pivotal roles, and their rise to fame began.

In the 138th year of Finubar the Seafarer's reign (2301 IC), the Dark Elves, accompanied by some Chaos allies, once again invaded Northern Ulthuan, intent on the utter conquest of their ancestral lands and the destruction of their High Elf cousins. The High Elves were largely unprepared, and the Dark Elves quickly burned and pillaged their way to the Everqueen's court in Avelorn. As the unending hordes closed in, Tyrion tore the Everqueen from her silk pavillon, and killed any dark elves who stood in his way, however, he was wounded by the poisoned blade of a Witch Elf as he cut a bloody exit route through the besieging force. They eventually managed to escape into the forests of Avelorn.[3b]

As the word that the Everqueen, and Tyrion, were missing and probably dead, reached the rest of Ulthuan, Teclis suspected the contrary, believing both were still alive. So he departed from the white tower with a sword he had himself forged. Meanwhile, Tyrion was succumbing to the venom of the witch elf, and the Witch King's servants were closing in. For the killing blow, the mighty Keeper of Secrets N'Kari was dispatched to slay the pair. Tyrion valiantly stood before it, protecting his queen, but he was no match for the daemon in his highly weakened state and was simply cast aside. As the Daemon of Slaanesh loomed over the Everqueen, a mighty blast ripped through the air and, with a thunderous roar, the Keeper of Secrets was banished to the warped hell from whence it came. As Teclis inspected his victory over the creature of Chaos, he rushed to his brother's aid, and with a few hushed whispers, he brought him back from the brink of death. [3b]

After he had been healed, Tyrion and the Everqueen was guided to the Inner Sea and were picked up by a ship manned by the remnants of the Maiden Guard who took them to the Plain of Finuval where the High Elf forces were gathering to make a last stand against the Dark Elves and forces of Chaos. Tyrions father gifted him with the ancient armour of his ancestor Aenarion, whilst the people of Ellyrion gave him Malhandir in gratitude for the rescue of Alarielle. In turn the Everqueen gave him the Heart of Avelorn. [3b]

Once the two armies had massed opposite each other, the champion of Malekith, Urian Poisonblade challenged anyone to face him. He cut down Arhalien of Yvresse with ease, and after a sort duel beheaded the captain of the White Lions, Korhian Ironglaive but now Tyrion now rode out to face him. The subsequent conflict lasted over an hour but resulted in the defeat of the Dark Elf. The two armies then charged each other. [3b]

As Malekith fought his own magical duel with Teclis, Tyrion cut down his standard bearer, breaking the enemy army who fled the field. Tyrion led the army on to relieve Lothern and then the Tower of Hoeth, following the enemy into Chrace, meeting the Phoenix King at Tor Achare, its capital in 2303 IC. [3b]

Some High Elven bards sing that Tyrion is Aenarion reborn. Since his meteoric rise to fame during the Great Chaos Incursion, many have spoken in hushed tones of his destiny to lead the High Elves towards a new and glorious future, and perhaps one day to take the Phoenix Crown. If Tyrion hears such gossip, he pays it no heed, for his only concern is the safety and protection of Ulthuan and the Everqueen. He is unswervingly loyal to the current Phoenix King, Finubar the Seafarer. [4a]

In the years since the Great Incursion, Tyrion has busied himself strengthening Ulthuan's armies and all know that whenever danger comes to the High Elves' island home, the enemy will be met by Tyrion. He is the protector of the Everqueen and the defender of all Ulthuan.

2326 IC saw the death of his father, and a brief but joyous reunion with his brother. [3b]

He defeated the invading fleet of Eric Redaxe and twice led assaults on the Blighted Isle to drive the Druchii from it. [3b]