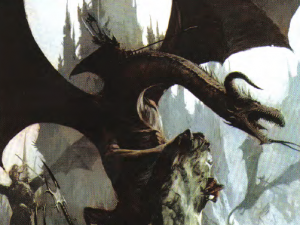 A Dark Elf mounted atop a Black Dragon.

Black Dragons are dark hued members of their race that live in the cold frigid lands of Naggaroth. [1a]

Like all intelligent creatures, Dragons are prone to acts of good or ill depending upon their nature and upbringing. When Prince Malekith began his schemes to usurp the Phoenix Throne for himself, his agents stole Dragon Eggs from the Kingdom of Caledor and used them to create a new breed of Dragons.

These Dragons were secretly nurtured in Nagarythe by Malekith and were enchanted with dark magic that would both corrupt and enhance the unborn Dragons within. The fiercest Black Dragons from the first clutch was Sulekh, who became the Witch King's newest mount following the loss of his own Dragon. Since Sulekh's death, her children have continued to live alongside the Dark Elves and have fought for them for many generations.

Some legends claim that they were sent into the world by Khaine himself, others that they are hatched from eggs stolen from Caledor and reared by the Beastmasters of Karond Kar. [1a]

Black Dragons are relatively similar to their more pure-blooded cousins in appearance, however they have lost the ability to belch flaming breath, and instead gained the ability to breathe a noxious gas that can wither the lungs of its victims and rot their flesh. [1a] Due to the excess of dark magic pulsing within their bodies, Black Dragons are notoriously stronger than their pure-blooded counterpart, without the horrific side-effects of mutation common in most tainted creatures.

Their scales provide them with protection superior to that of the best plate armour. [1a]