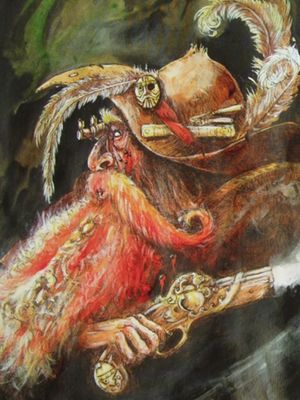 Red Brokk Gunnarsson is a Dwarf Master Engineer of Barak Varr. [1a]

For over a three hundred years, Brokk has been an enginer in his home city, specalising in steam-based seafaring establishing a formidable repuation. He created the many-legged bathyscaphe Chasm Crawler , the gyrostablised seacannon and the twelve engined siegebulker. [1a]

As a member of the Guild of Master Engineers, he worked alongside Tordrek Hackhart who although considered the master of submersible engineering became increasingly jealous of the accolades given to Red Brokk, something that festered over several decades. Then one day, in the shipyard, Tordrek accidently shot Brokk a dozen times with a rivet claw but failed to kill him. For this crime, Hackhart was banished from Barak Varr but took his most advanced creation, the Black Kraken with him. [1b]

His Ironclad Grungni's Forge was destroyed by the renegade Tordrek Hackhart and his Black Kraken and was rescued from its wreck by Captain Jaego Roth. Now he seeks vengeance alongside the manlings aboad his battleship Grimnir's Thunder. [1a]