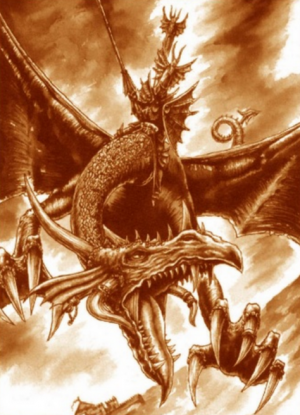 Asarnil the Dragonlord is a famous Dogs of War mercenary who hailed from the mist shrouded lands of far-off Ulthuan. [1a]

Asarnil was once a famed hero of caledor, and as an Elf, was far faster than any human warrior. [1a]

Previously a former Dragon Prince of the Kingdom of Caledor, Asarnil is now famous throughout the Old World as a powerful and mighty warrior riding on-top of his terrifying dragon. Alongside his dragon Deathfang, Asarnil would eventually lose all of his inheritance and domain after disobeying the orders of the Phoenix King. Following his exile, he left Ulthuan and traveled towards the lands of Tilea, where he served as a mercenary-for-hire to the Merchant Princes of Remas. Ever since then, Asarnil has carved a new domain for himself as a powerful warrior with an expensive fee. With his mighty skills in combat and the strength and courage of his loyal companion, Asarnil's has won himself victory after victory, and soon, he hopes to return to the lands of his birth and start life anew.[1a]

The legend of Asarnil the Dragonlord is known throughout his homeland of Ulthuan. Asarnil was the son of Lord Aserion, an Elven hero who is said to have fought a thousand battles. From his earliest years, Asarnil was brought up in the martial traditions of Caledor. He became a great warrior and one of the few Elves still able to rouse the Dragons who slept beneath the Dragonspine Mountains of northern Caledor. His companion, Deathfang, was one of the greatest Dragons that the Princes of Caledor could still wake from their deep slumber. Together they were all but invincible, and their fame reached far beyond the boundaries of Caledor. During the Great War Against Chaos, Asarnil fought with distinction alongside his fellow Dragon Princes. Asarnil commanded them in battle, and it was because of him that Caledor was not overrun during those dark times.[1a]

After the Battle of Finuval Plain, Asarnil had been ordered to link up with the High Elven forces marching from the Kingdom of Lothern. Once the Dragon Princes arrived, the combined forces of Lothern and Caledor was able to destroy the last major Dark Elven invasion force still left within Ulthuan. But before Asarnil could fly to the Phoenix King‘s aid, word came that Caledor itself was under attack. Under the command of Asarnil, an entire flight of Dragonriders sped back through the skies to protect their homeland. In a brilliant assault, the Dragonriders of Caledor swept the Dark Elves to the sea, and Caledor was saved from conquest.[1a]

Triumphant, Asarnil headed back towards the rendezvous with the Phoenix King, confident that great rewards and honour awaited him upon his arrival. On hearing that his orders had been disobeyed, Phoenix King Finubar became enraged. If his troops had come under attack without the support of the Dragon Princes, they would have faced total destruction. When Asarnil and his fellow Dragonriders arrived at the Phoenix King‘s camp, no parade awaited them. Instead, Asarnil was summoned before the Phoenix King to account for his actions. Enraged that the Phoenix King would accuse him for saving his homeland from destruction, Asarnil declined and swore that he was no longer a subject of the crown of Ulthuan. The response from Finubar the Seafarer was quick and harsh. Asarnil would be stripped of his title and lands and banished from Ulthuan, unless he would face the Phoenix King‘s justice and accept the punishments.[1a]

Proudful to the last, Asarnil declined. Asarnil was now a Prince without a domain, a Lord in exile. He gathered his weapons and armour, mounted Deathfang, and left the blessed island of Ulthuan behind. Asarnil headed towards the old ruins of an Elf city in the south of the Old World, where he found that humans now inhabited the land. His Dragon descended upon the city-state of Remas in the lands of Tilea, much to the dismay of the citizenry. However, the Prince of Remas soon realized that such a mighty ally would give them the advantage they needed in their war against the other Principalities, and immediately hired the services of Asarnil for the war the city of Remas was waging against the city of Miragliano. With the help of Asarnil and the awesome might of Deathfang, Remas decisively defeated their rivals and brought the war to a successful conclusion. Indeed, such was the terror inspired by Deathfang that most of the men of Miragliano threw down their arms and fled from the field without a battle.[1a]

In the naval battle of the Siren‘s Rocks, Asarnil and Deathfang destroyed Miragliano‘s entire fleet, and ended the city‘s supremacy at sea. Since those days, the proud banner of Asarnil had flown over countless battlefields throughout the Old World. Only the greatest Princes can afford the exorbitant fee of the Dragonlord, but a general calling upon Asarnil is almost guaranteed to be victorious. [1a]

In his heart of hearts, Asarnil still dreams of returning to Caledor in triumph with the riches he has won, but for now his lance and sword are for still up for hire.[1a]

Asarnil can be hired only by Bretonnia, the Empire, High Elves, Lizardmen, Wood Elves and if he is feeling generous, Dwarfs. [1a]